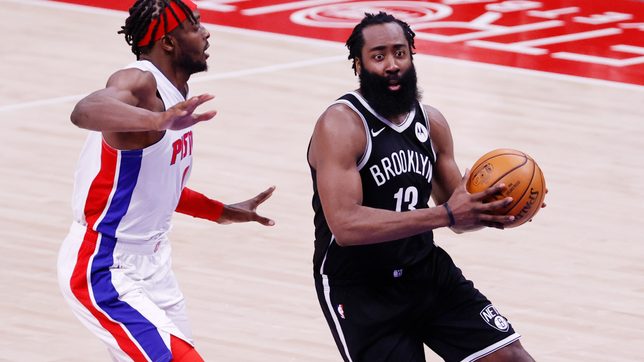 2018 MVP James Harden felt like he was the ‘MVP of the season’ after piling up 44 points, 14 rebounds and 8 assists and the visiting Brooklyn Nets held off the Detroit Pistons 113-111 on Friday, March 26.

“I feel like I am the MVP,” said Harden, who made his case stronger as he averaged a near triple-double since he joined the Nets.

“I don’t want to speak individually on myself,” Harden said. “I’m just going to leave it at that.”

Harden, who missed Brooklyn’s previous game with a neck injury, made 14-of-30 field goal attempts and 12-of-14 free throws. Blake Griffin, playing against his former team for the first time, supplied 17 points off the bench. DeAndre Jordan added 10 points and nine rebounds for the Nets.

Detroit center Isaiah Stewart was ejected in the 2nd quarter for elbowing Griffin in the face. He retaliated after getting hit by an elbow from Griffin, who was assessed a technical.

The Pistons cut Brooklyn’s lead to four, 65-61, with 7:38 left in the third quarter. Grant scored 6 points in that burst.

With just over two minutes to go in the quarter, Grant made a running hook shot to put Detroit on top 76-75.

Brooklyn regained the lead with a 7-2 spurt to end the quarter. Harden reached the 30-point mark by nailing a 3-point shot in the final second to make it 82-78.

After Detroit tied it again at 82, Griffin knocked down a 3-pointer to begin a 10-0 Nets run. Harden scored the other 7 points in the spurt, including two 3-pointers.

The Nets inched their lead to 11 when Tyler Johnson drained a 3-pointer, and after Jackson nailed a trey on the other end, Johnson hit another 3-pointer to make it 98-87 with 8:30 left.

The Pistons hung around and got within one, 102-101, when Jackson hit two 3-pointers on back-to-back possessions.

Bey tied the game at 106-all with a shot in the lane, but Harden answered with a three-point play with 2:06 left.

With 3.3 seconds left and Brooklyn up two, Bey stole an inbounds pass and Detroit called its final timeout. But Cory Joseph, playing his first game with the Pistons after being acquired from Sacramento, didn’t get a shot off in time. – Rappler.com