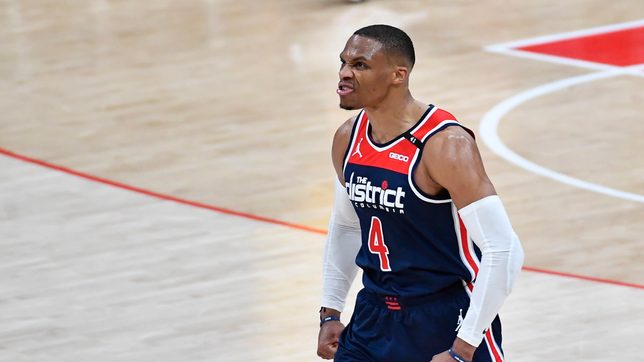 TRIPLE-DOUBLE KING. Russell Westbrook continues to bring his A-game to Washington with 35 points, 21 assists and 14 rebounds.

Russell Westbrook collected 35 points, a season-high 21 assists and 14 rebounds to fuel the host Washington Wizards to a 132-124 victory over the Indiana Pacers on Monday, March 29.

Westbrook made 14 of 26 shots from the field, including 4 of 6 from 3-point range. The triple-double was Westbrook’s NBA-leading 16th of the season and second in as many games.

Rui Hachimura had 26 points and 8 rebounds and Chandler Hutchison added 18 points off the bench for the Wizards, who played without NBA leading scorer Bradley Beal (right hip contusion). Raul Neto scored 15 points off the bench to help Washington win its second in a row after losing 8 of its previous 9.

All was not rosy for the Wizards, however. Recent acquisition Daniel Gafford rolled his ankle and left the court in a wheelchair.

Domantas Sabonis recorded 35 points and 11 rebounds and Malcolm Brogdon added 26 points for the Pacers, who were foiled in their bid to win three in a row for the first time since capturing the first 3 games of the season.

Indiana scored 9 straight points to secure a 116-110 lead with 5:47 remaining in the 4th quarter before Washington countered with a 22-8 run to end the game. Westbrook drained a step-back jumper, a layup and two 3-pointers during the pivotal surge.

Hutchison made 3 baskets to help Washington bridge the third and fourth quarter with a 9-0 run and claim a 97-92 lead. Indiana quickly forged a tie after Myles Turner sank a 3-pointer and Edmond Sumner added a pair of free throws.

Brogdon drained 3 3-pointers en route to scoring 11 points to stake Indiana to a 28-24 lead at the end of the first quarter. Hachimura scored 8 points to pace the Wizards, who misfired on all 4 attempts from 3-point range.

The teams continued their tight battle throughout the 2nd quarter, with Sabonis’ dunk, hook shot and free throw allowing the Pacers to secure a 58-57 lead at halftime. – Rappler.com