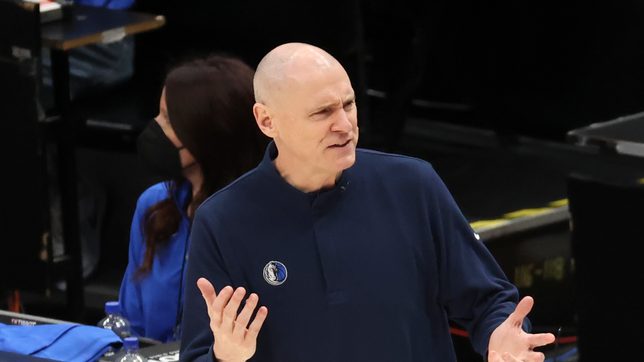 Facebook Twitter Copy URL
Copied
‘This was solely my decision,’ says coach Rick Carlisle as he leaves the Mavericks after 13 seasons

“Rick informed me today about his decision to step down as head coach,” Cuban said. “On top of being a tremendous basketball coach, he was also a friend and confidant. Rick helped us bring the O’Brien Trophy to Dallas and those are memories I will always cherish. I want to thank Rick for all he gave this franchise and this city. We wish him all the best.”

Carlisle added context to the move in a statement to ESPN.

“After a number of in-person conversations with Mark Cuban over the last week, today I informed him that I will not be returning as head coach of the Dallas Mavericks,” Carlisle said. “This was solely my decision.”

He added, “Dallas will always be home, but I am excited about the next chapter of my coaching career.”

Carlisle had two years remaining on his contract.

Dallas lost its first-round Western Conference playoff series to the Los Angeles Clippers in seven games after taking leads of 2-0 and 3-2 earlier in the series.

The Mavericks were the No. 5 seed in the conference after a 42-30 regular-season finish. Star forward Luka Doncic turned in another stellar season and was named to his second straight All-NBA first team.

On Wednesday, the Mavericks announced they “mutually agreed to part ways” with Nelson, who served in that capacity for 24 seasons. ESPN and The Athletic reported that Nelson was rankled by the ever-growing influence of the team’s director of quantitative research and development, Haralabos “Bob” Voulgaris.

Doncic is eligible for a max contract extension this offseason and described the Nelson move as “tough.”

A day earlier, the Washington Wizards also parted ways with head coach Scott Brooks, while Stan Van Gundy is out after one season as head coach of the New Orleans Pelicans.

The Pelicans and Van Gundy mutually agreed to part ways, per the team’s release.

The Wizards and Brooks, meanwhile, failed to agree on a new deal. His contract expired at the end of the 2020-2021 season.

With Van Gundy’s departure, former top overall pick Zion Williamson will be looking at his third different head coach in as many NBA seasons in 2021-2022.

The Pelicans did not qualify for the playoffs after posting a 31-41 record under Van Gundy in 2020-21. They won four of their first six games to start the season before failing to climb over .500 for the remainder of the campaign.

Brooks led the Wizards to a 34-38 record and a playoff appearance as the No. 8 seed in the Eastern Conference this season. They lost to the Philadelphia 76ers in five games in the first round. – Rappler.com