The rowdy East comes down to a fiery ending 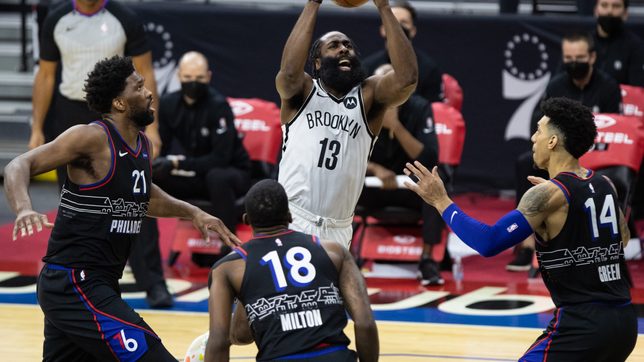 Facebook Twitter Copy URL
Copied
The East has been split into hierarchies, but that hasn’t deterred the high-level of competition displayed on a nightly basis

An exciting, frustrating, and unpredictable game of nip-and-tuck has been the running theme of the Eastern Conference this NBA season.

How unsurprising that a tightly contested race in the standings will come down to the final days of non-playoff play, following the many twists and turns its key teams have had to deal with in what’s been an out-of-the-ordinary campaign for the nearly 75-year-old basketball league.

The East has been split into hierarchies, but that hasn’t deterred the high-level of competition displayed on a nightly basis. As often as head-scratching blowouts take place, so do out-of-nowhere upsets. Social media has been set ablaze by #LeaguePass alerts and headline-grabbing individual performances.

Philadelphia, Brooklyn, and Milwaukee established themselves from the early stages as the leaders of the pack and, to their credit, have succeeded in retaining their positions.

The 76ers (47-22) are essentially a win away from securing the No. 1 seed and homecourt until the Finals, with tilts against Miami and rebuilding Orlando (twice) coming up.

Philly’s MVP candidate, Joel Embiid, who on some days looks like the best basketball player in the world, reportedly did not make the trip to Miami because of a non COVID-related illness. His team is 9-11 in games he’s missed this season, and with the Heat peaking as of late, it will be a task for the 76ers to clinch the top spot before the weekend.

“I’ve been dominant all season. I’m not going to be out here trying to push myself, but I know that I’ve been dominant also. We [have] the No. 1 seed. When I get the ball it’s either a foul or bucket… I feel like I’m right there. I feel like that’s mine,” Embiid said, not shy of expressing his sentiments about the MVP race, when asked by Rappler after a 76ers win over Brooklyn in April.

If not for the individual brilliance of Denver’s Nikola Jokic, who is averaging 26.5 points, 10.8 rebounds, and 8.4 assists a game, Embiid would be discussed more as MVP.

Heck, if he didn’t miss time halfway through the season – at a point where it was clear he was leading the race – he would be neck and neck right now with “The Joker” for the trophy. With averages of 29.2 points, 10.7 rebounds, 2.9 assists, 1.4 blocks, and 1 steal a contest, Embiid’s got the data to back his case up.

“But that’s not what I’m focused on; I’m focused on winning every single game, getting to the playoffs healthy, trying to win what matters the most – and that’s the NBA championship,” he said.

It’s just to mention Embiid has benefited from impressive seasons by his teammates, notably Ben Simmons and Tobias Harris. Moreover, the arrival of veteran coach Doc Rivers and GM Daryl Morey had the Sixers in a better situation than they were at this point last year.

The key adversary for Brooklyn has been health, as their Big Three of Kyrie Irving, Kevin Durant, and James Harden have combined to play only seven regular season games together. Just as Harden returned on Thursday, May 13, Irving was sidelined because of an inadvertent shot he took from Nikola Vucevic a game prior in Chicago. It’s unclear when he will return.

Brooklyn has two games left, both at home, against the Bulls and Cavaliers. Those should be easy wins. There’s concern of how they will mesh in the postseason when their three best players haven’t played together in weeks. Nonetheless, rookie head coach Steve Nash and his staff should be commended for steering a team which has had multiple roster changes to a 46-24 record.

Unless Philly loses out, it’s unlikely Brooklyn catches them for the top seed. The 44-25 Bucks aren’t far behind, propelled by Milwaukee’s two impressive victories against the Nets last week. Owning the tiebreaker, Giannis Antetokounmpo and company are incentivized to pursue Brooklyn for homecourt in the event both squads battle in the semis.

The Bucks end their regular season at Indiana, against Miami, and at Chicago.

The standings from 4-10 was way more clustered throughout the season, but the recent weeks have seen three teams separating themselves to avoid the play-in.

Sparked by the mid-season change to replace Lloyd Pierce with veteran coach Nate McMillan, Atlanta is now in prime position to finish at No. 4 and earn homecourt in round one. The Hawks improved to 39-31 after scoring consecutive wins against the Bradley Beal-less Wizards and now have easy games coming up against the rebuilding Magic and Rockets.

The Knicks, who are 38-31 after their heartbreaking loss to the Lakers, own the tiebreaker over the Hawks but need to win their last three games at home against San Antonio, Charlotte, and Boston – opponents in the play-in picture. It is doable, and the thought of hosting a Game 7 in Madison Square Garden should inspire the cast of head coach Tom Thibodeau, who’s arguably the leader for Coach of the Year.

The Heat (38-31), who happen to be defending Eastern Conference champions, have an outside shot of making the 4-5 matchup, but their remaining schedule provides ample challenge. A day after it’s announced Victor Oladipo will undergo season-ending surgery, Miami will host Philadelphia before closing on the road against Milwaukee and rebuilding Detroit.

The 76ers are still good without Embiid and motivated to clinch the top seed, while the Bucks might go full lineup against the Heat for two reasons: they would still be in play for No. 2, plus Milwaukee might want vengeance against the team that eliminated them in the bubble.

“Just focusing on Philly will be enough to keep, you know, our interest and time and focus. They’ve been playing great basketball, arguably the best defensive team in the league, and an MVP candidate in Embiid,” Miami head coach Erik Spoelstra told Rappler.

“It’s been hard not to notice how well they’ve played this year.”

Miami is 32-19 when Jimmy Butler, who missed time early in the season due to COVID-19, is in the lineup. That’s a winning ratio that would nearly put them in the same class as the top three. Since Jimmy Butler called out his team for playing “soft” – including himself in that criticism – the Heat have won 10 of 13. Are they peaking at the right time?

“We’re all going through nagging injuries. We just continue to put ourselves out there and try to win, but I feel like we’re definitely at the right spot, at the right time, we just got to continue to keep this thing rolling and trend in the right direction,” Tyler Herro said.

Avoiding No. 6 means preventing a first or second round matchup against Brooklyn or Milwaukee.

After two incredibly disappointing performance in their back-to-back losses at home against Miami, Boston’s losing ways continued after a head-scratching defeat in Cleveland. Add the fact that Jaylen Brown will be sidelined the rest of the season and it’s tough to imagine what Celtics fans are going through right now.

Boston is now 35-35, not far ahead of 33-36 Charlotte and Indiana. They will likely finish in some order for 7-8-9. The two losses in Atlanta were tough, but Washington still controls its destiny for No. 10, the final play-in, with remaining home matchups against Cleveland and Charlotte.

The cast for the Eastern Conference’s play-in round and postseason looks set.

The only question now is, who will play which part? – Rappler.com