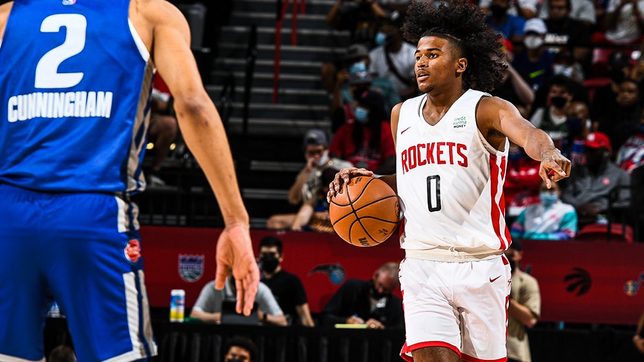 Filipino-American rookie sensation Jalen Green delivered once again for the Houston Rockets as they crushed the Detroit Pistons, 111-91, in the NBA Summer League on Tuesday, August 10 (Wednesday, August 11, Manila time) at the Thomas & Mack Center in Las Vegas.

Green, the second overall pick in the 2021 NBA Draft, dropped a game-high 25 points on a very efficient 6-of-11 shooting, along with 5 rebounds and 3 assists to lead the Rockets to a blazing 2-0 start in the Summer League.

Moreover, Green outplayed the Pistons’ No. 1 pick Cade Cunningham in the highly anticipated Summer League showdown between the top two picks in this year’s draft.

“My chip is super big, it started at draft night when I got drafted at No. 2,” said Green, who is currently averaging 24 points and 5 rebounds in his first two games in a Rockets uniform.

After trailing by as many as 10 points in the opening period, Green and the rest of the Rockets flipped the switch in the second quarter and took an 11-point lead, 54-43, at halftime.

The Rockets never looked back in the second half and extended their lead to 19 points late in the third frame, 78-59, which proved too much for the Pistons to overcome.

Rookie big man Alperen Sengun, the Rockets’ 16th pick in the draft, chipped in 21 points and 8 rebounds, while KJ Martin put up 16 points, 6 rebounds, and 4 assists.

Cunningham led the way for the Pistons with 20 points on 8-of-18 shooting, to go with 4 rebounds and 3 steals in the loss.

The Rockets will get one day off before facing the Toronto Raptors on Friday, Manila time. – Rappler.com