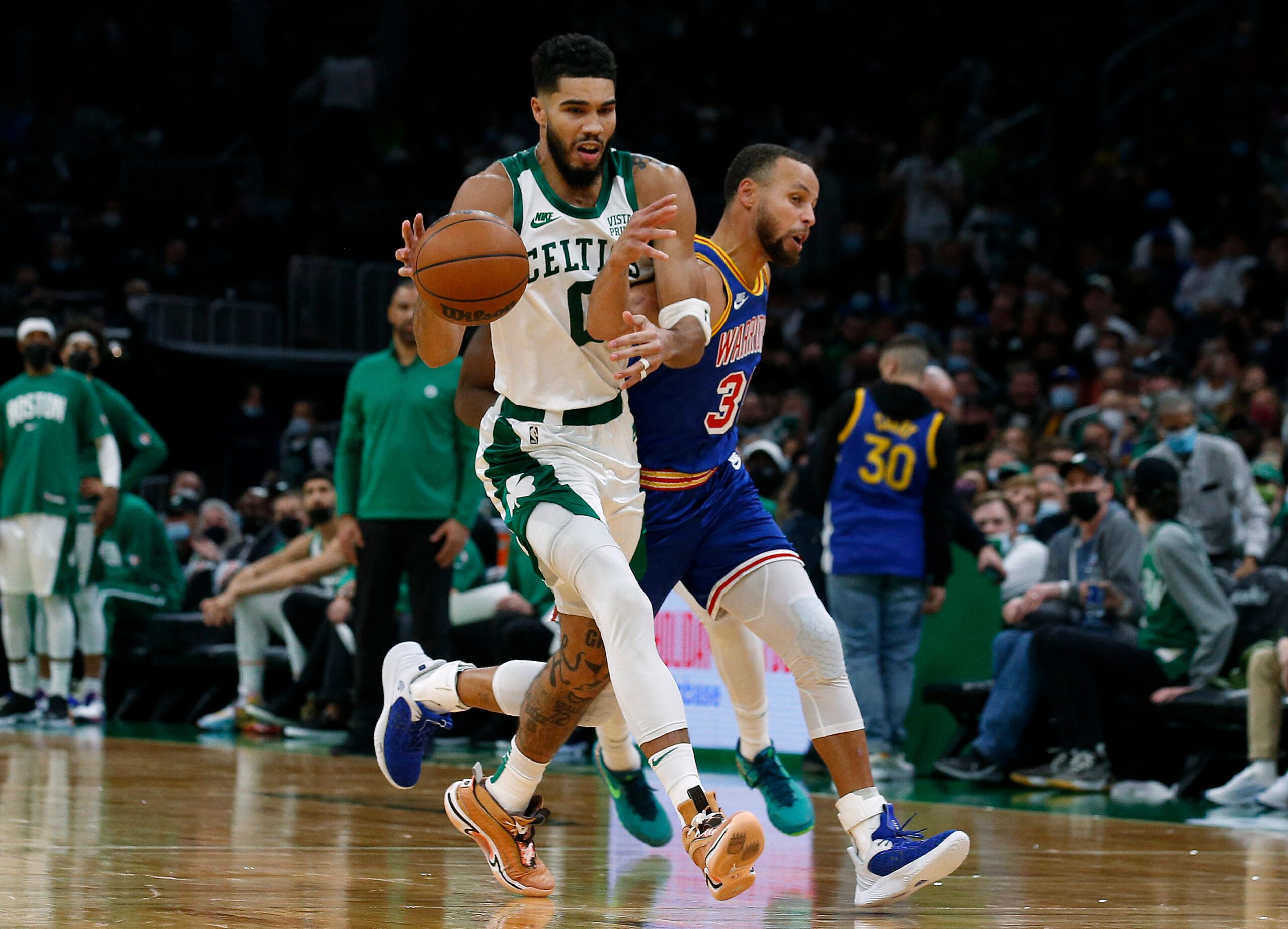 TITLE SHOWDOWN. Jayson Tatum and the Celtics tangle with Steph Curry and the Warriors in the best-of-seven championship.

Facebook Twitter Copy URL
Copied
Steph Curry and the Warriors may be favored in the title series, but Jayson Tatum and the Celtics are the only NBA team to have a winning record against them since the Golden State dynasty began

The NBA’s landmark 75th anniversary season will culminate with one of its original franchises lifting the Larry O’Brien Trophy. Both Boston and Golden State have played all 76 NBA seasons, beginning in 1946-1947. In fact, the Warriors won the first NBA championship (as the Philadelphia Warriors).

Here are some fast facts on the NBA Finals series that kicks off on Thursday, June 2 (Friday, June 3, Manila time):

The Boston Celtics are in position to win their record-setting 18th NBA championship, which would break a tie with the Los Angeles Lakers for the most titles. The Lakers pulled even with Boston by winning No. 17 two years ago. The Celtics last won the NBA championship in the 2007-2008 season. Boston is in the NBA Finals for the first time since the 2009-2010 season.

The Golden State Warriors are seeking their fourth NBA championship in eight seasons and seventh overall. With a seventh title, Golden State would pass the Chicago Bulls for sole possession of third place all time, behind the Boston Celtics and Los Angeles Lakers (17 each).

Teams with most NBA championships:

The Celtics and Warriors will meet in the NBA Finals for the first time in 58 years and the second time overall. The 1964 championship series between Boston and the San Francisco Warriors – won by the Celtics in five games – marked the first NBA Finals matchup between legends Bill Russell (Boston) and Wilt Chamberlain (San Francisco), whose rivalry helped define the sport for a decade. The Celtics and Warriors also met three other times in the playoffs when the Warriors called Philadelphia home before moving West in 1962.

Teams with most NBA Finals appearances:

Golden State guard Stephen Curry is a two-time NBA MVP and one of the greatest shooters in league history. Boston guard Marcus Smart is the 2021-2022 NBA Defensive Player of the Year and the relentless leader of Boston’s league-best defense. They set the tone for their respective franchises – it’s been 13 seasons with Golden State for Curry and eight seasons with Boston for Smart. Their head-to-head matchup will be one to watch.

Eastern Conference Finals MVP Jayson Tatum of Boston enters his first NBA Finals as a bona fide superstar and favorite of his peers. Tatum is already a three-time NBA All-Star and a 2021-2022 All-NBA First Team selection – and he just turned 24 years old in March. Golden State forward Draymond Green, a teammate of Tatum’s on the gold-medal-winning US Olympic team last summer, recently told the Celtics’ standout that he could be the NBA MVP next season. Former NBA MVP Kevin Durant has similarly praised Tatum’s MVP-caliber talent. The best may be yet to come for a bright young star.

Three years after sustaining a knee injury in the NBA Finals that led to two missed seasons and nearly 950 days between NBA games, guard Klay Thompson is back on the big stage with the Warriors. The five-time NBA All-Star and three-time NBA champion has made an inspiring comeback and says he wants to lift the Larry O’Brien Trophy again “more than anything.” Thompson will be in the NBA Finals for the sixth consecutive season in which he has played (2014-2015 to 2018-2019 and 2021-2022).

Boston forward-center Al Horford’s first NBA Finals appearance has been a long time coming. A 15-year veteran with 13 seasons of playoff experience, Horford has played more playoff games without appearing in the NBA Finals than any player in league history (141 playoff games). The five-time NBA All-Star, who turns 36 the day after Game 1 of the NBA Finals, is beloved by teammates for his selfless play and steady leadership. He has had a terrific season in his second stint with the Celtics, highlighted by a fantastic playoff run.

Western Conference Finals MVP Stephen Curry is one step away from burnishing his legacy as an NBA legend. A series victory would give the NBA 75th Anniversary Team member and three-point king four NBA championships to go with two NBA MVP awards. The short list of six players to win at least four NBA championships and two NBA MVP awards is a who’s who of basketball royalty: Kareem Abdul-Jabbar, Tim Duncan, LeBron James, Magic Johnson, Michael Jordan, and Bill Russell.

Golden State head coach Steve Kerr is looking to put the finishing touches on a memorable season. In December, he was named the new USA Basketball Men’s National Team head coach. In February, he was named one of the 15 Greatest Coaches in NBA History. And now in June, he has a chance to become only the sixth coach in league history to win four or more NBA championships, joining Phil Jackson (11), Red Auerbach (9), John Kundla (5), Gregg Popovich (5), and Pat Riley (5).

Ime Udoka has led Boston to the NBA Finals in his first season as an NBA head coach. He has a chance to become the fourth person in the last eight years to win an NBA championship as a rookie head coach , joining Steve Kerr (2014-2015 season), Tyronn Lue (2015-2016) and Nick Nurse (2018-2019). Udoka overcame two ACL surgeries to play in the NBA as an undrafted player. His career included a stint with the San Antonio Spurs playing for the legendary Gregg Popovich, who gave Udoka his start as an NBA assistant coach and later hired him as a USA Basketball assistant.

Head coaches with most NBA championships:

New on the scene

Golden State center Kevon Looney and Boston forward Grant Williams have been unsung heroes for their respective teams – two consummate professionals and popular teammates. Looney’s defense, rebounding and scoring at the rim have proved essential for the Warriors, especially in the Western Conference Finals, where he posted two double-doubles and had the highest-scoring game of his NBA career (21 points). Williams energizes the Celtics with his defense and three-point shooting, shifting seamlessly between the starting lineup and a reserve role. He was a finalist for the 2021-2022 Twyman-Stokes Teammate of the Year Award.

The Celtics are the only NBA team to have a winning record against the Warriors during Steve Kerr’s tenure as Golden State’s head coach, which began with the 2014-2015 season. Boston is 9-7 against Golden State during that eight-season span. On April 1, 2016, the Celtics snapped the Warriors’ NBA-record 54-game home winning streak in the regular season.