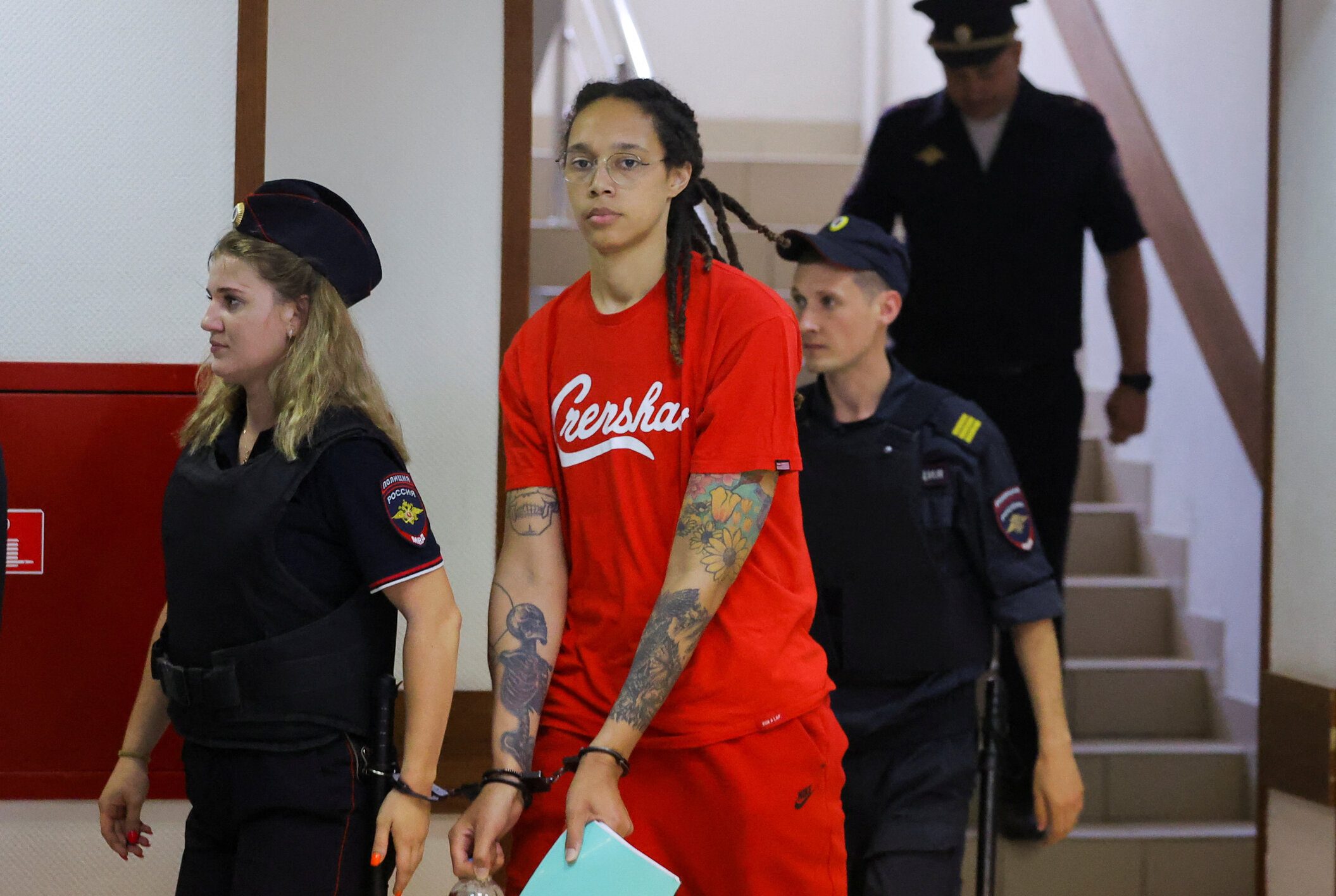 DETAINED. US basketball player Brittney Griner is escorted before a court hearing in Khimki, outside Moscow, Russia.

WASHINGTON, USA – US basketball star Brittney Griner was transferred last week from a detention center outside the Russian capital and is on her way to a penal colony, her legal team said on Wednesday.

The two-time Olympic gold medalist was arrested on February 17, a week before Russia sent troops into Ukraine, at a Moscow airport with vape cartridges containing cannabis oil, which is banned in Russia. She was sentenced on August 4 to nine years in a penal colony on charges of possessing and smuggling drugs.

Griner had pleaded guilty but said she had made an “honest mistake” and had not meant to break the law.

Neither Griner’s exact whereabouts nor her final destination were known, the legal team said in a statement, adding that in line with Russian procedures, her attorneys as well as the US Embassy should be notified upon her arrival at her destination.

The notification would take up to two weeks to be received.

The White House said US President Joe Biden has directed his administration to “prevail on her Russian captors to improve her treatment and the conditions she may be forced to endure in a penal colony.”

It did not give any details about Griner’s whereabouts.

The Biden administration in late July proposed a deal for a prisoner swap with Russia to secure her release, as well as that of former US marine Paul Whelan, but Moscow has yet to respond positively to the offer.

“Despite a lack of good faith negotiation by the Russians, the US government has continued to follow up on that offer and propose alternative potential ways forward with the Russians through all available channels,” White House spokeswoman Karinne Jean-Pierre said.

The souring of ties between Russia and the West has complicated the talks to secure Griner’s release.

“Our primary concern continues to be BG’s health and well-being,” Griner’s agent Lindsay Colas said in a separate statement, referring to the player by her initials.

“As we work through this very difficult phase of not knowing exactly where BG is or how she is doing, we ask for the public’s support in continuing to write letters and express their love and care for her,” Colas said.

She said Griner’s team remained in close contact with the US government as well as the Richardson Center, named after former US diplomat Bill Richardson, who has privately worked to secure the release of American detainees abroad.

Biden’s national security adviser Jake Sullivan, in an earlier statement, described Griner’s conditions as “intolerable” and the trial she had to go through as “another sham judicial proceeding.”

Whelan was convicted by Russia of spying and jailed for 16 years in 2020. He denies espionage and has said he was set up in a sting operation. Washington has demanded his release. – Rappler.com