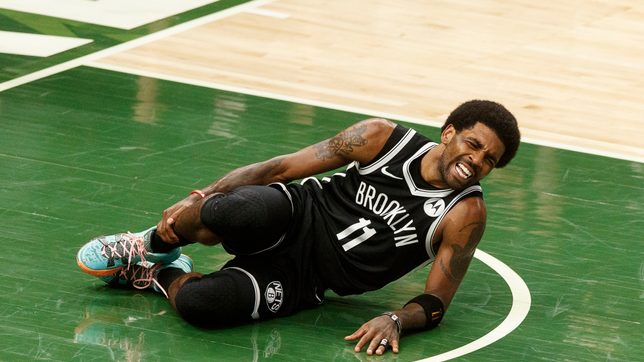 SHORTHANDED. The Nets allow the Bucks to level the series as Kyrie Irving goes down with an injury.

Brooklyn Nets guard Kyrie Irving left in the second quarter of Game 4 of the Eastern Conference semifinals against the Milwaukee Bucks on Sunday, June 13 (Monday, June 14, Manila time) with a sprained right ankle.

The Nets ruled Irving out for the rest of the game, which the Bucks went on to win, 107-96, to level the series at two games apiece.

Irving was injured with 6:04 remaining after converting a layup that got Brooklyn within 44-40. After scoring the basket, he landed awkwardly on the foot of Milwaukee forward Giannis Antetokounmpo.

Irving stayed down on the floor as play continued on the other end and the Nets were able to get a timeout to attend to him with 5:52 left in the half. After the timeout, Irving limped back to the locker room while putting a small amount of weight on his ankle.

Irving scored 11 points on 5-of-11 shooting in 17 minutes before getting hurt. In the first eight games of the postseason, Irving averaged 24.1 points on 47% shooting.

The spitfire guard is the second member of the Nets’ star trio to suffer an injury during the series.

In Game 1, James Harden injured his right hamstring on a drive to the basket 43 seconds in and has missed the past three games with right hamstring tightness. – Rappler.com