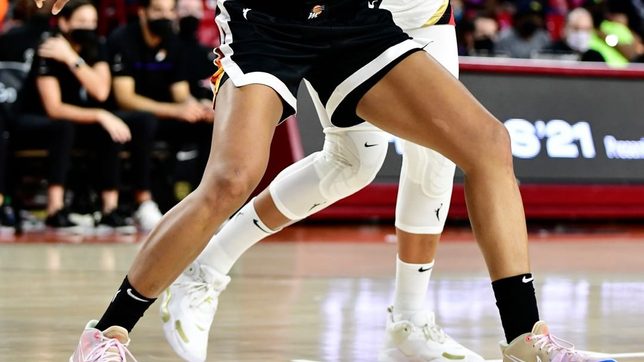 TAKE CHARGE. Brianna Turner dominates in the Mercury’s Game 3 rout of the Aces.

Brianna Turner and Brittney Griner each had a double-double as the host Phoenix Mercury routed the Las Vegas Aces, 87-60, to take a 2-1 lead in their best-of-five WNBA semifinal playoff series Sunday, October 3 (Monday, October 4, Manila time).

Turner had 23 points and 17 rebounds, and Griner had 18 points and 11 boards as the fifth-seeded Mercury won their second straight game against the second-seeded Aces.

Shey Peddy came off the bench to add 10 points for Phoenix, which will host Game 4 on Wednesday night.

Liz Cambage scored 13 points and Dearica Hamby added 10 off the bench to lead the Aces, who started slowly for the third straight game in the series. Las Vegas shot just 30.9% from the floor and was outrebounded, 58-29.

Kia Nurse started the third-quarter scoring with a three-pointer and Griner added a basket that gave the Mercury a 51-31 lead.

The closest the Aces could get in the quarter was 16 points before Peddy’s buzzer-beating basket gave Phoenix a 72-52 spread at the end of the period.

Kahleah Copper, meanwhile, had a playoff-career-high 26 points as the sixth-seeded Chicago Sky outlasted the top-seeded Connecticut Sun, 86-83, in Game 3 to take a 2-1 lead in their own best-of-five-semifinals series in Chicago.

Connecticut used a 21-9 fourth-quarter surge to secure a 79-68 win in Game 2 on Thursday to even the series after Chicago’s 101-95 double overtime victory in Game 1.