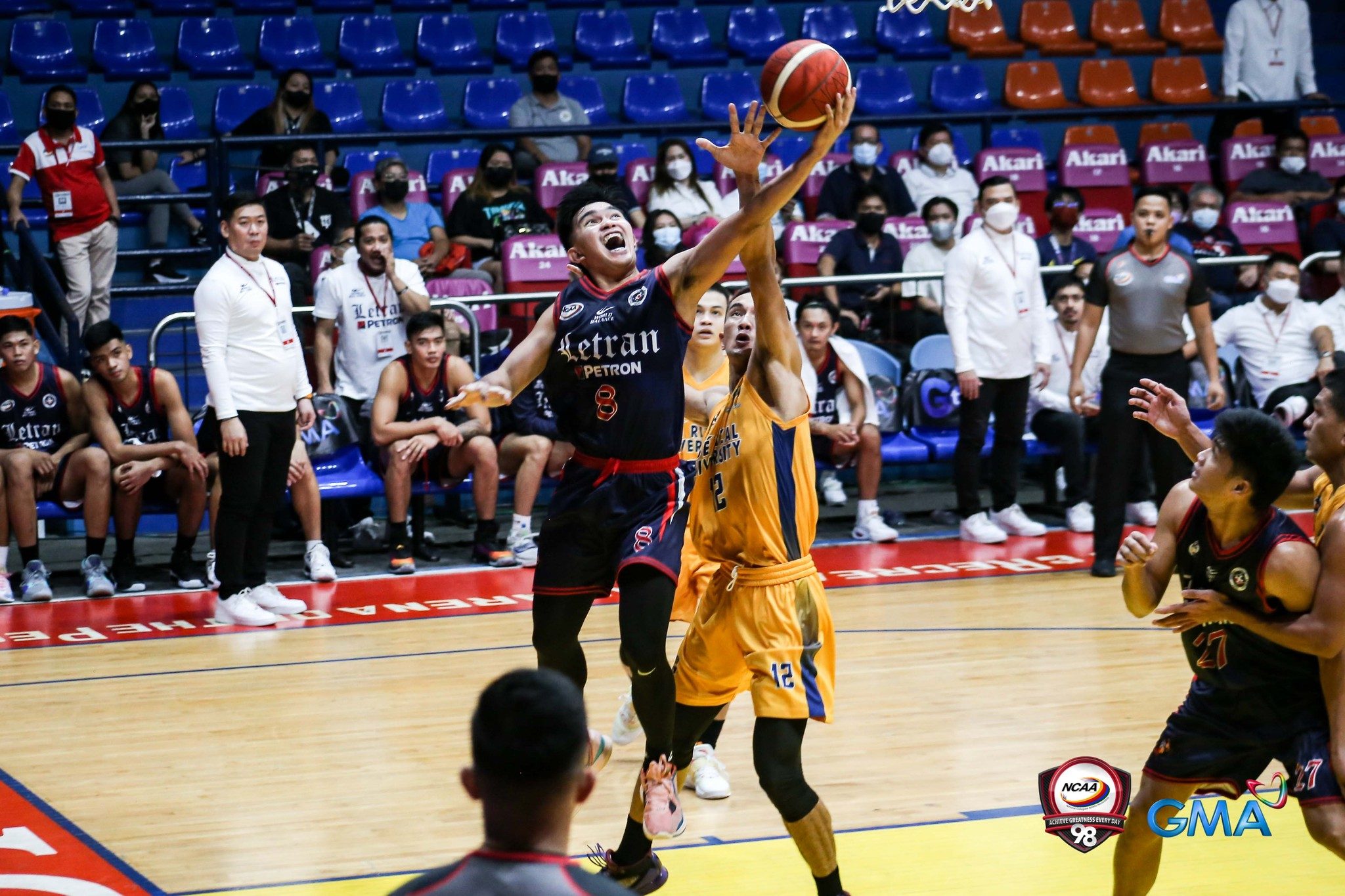 STEPPING UP. Kurt Reyson sinks 2 of his career-high 31 points against JRU at the NCAA Season 98.

MANILA, Philippines – The Letran Knights weathered big haymakers from the feisty JRU Heavy Bombers as they completed a thrilling overtime escape, 101-97, to start off their NCAA Season 98 title defense campaign at the FilOil EcoOil Centre on Wednesday, September 14.

Third-year guard Kurt Reyson erupted for a collegiate career-best 31 points on 9-of-14 shooting and 6-of-8 from three – none bigger than the pull-up bomb he dropped off a steal for the 89-all tie with 5 seconds left in regulation.

Thanks to Reyson’s heroics, Letran started off the extra period in control with a 6-1 start for the 96-90 lead, highlighted by more Reyson offense from three and from the line.

Although the Heavy Bombers fought back for a 96-all tie, multiple unforced errors from their end ultimately spelled the difference as Fran Yu closed the game out with a pair of charities to set the final score.

As a testament to how heated the contest was, both teams even nearly came to blows right at the final buzzer, but cooler heads prevailed as the two sides separated for the singing of the school hymns.

King Caralipio churned out a 14-point, 11-rebound double-double in the win while veteran guard Brent Paraiso scattered 12 points, 4 steals, 3 boards, and 2 assists as Letran shoots for a title three-peat without reigning MVP Rhenz Abando, who has since gone pro in Korea.

Yu scored 12 with 6 rebounds, 5 dimes, and 3 steals to help lead the Knights to its 14th straight win dating back to its title-clinching NCAA Season 95 Game 3 win in 2019.

“It was JRU’s game, but we were able to shoot our way out of it,” said Letran head coach Bonnie Tan. “Kurt Reyson played a good game. He wasn’t forcing his shots. I couldn’t say anything more.”

“For me, it’s time for him to step up. Before, he was always being overshadowed by the veterans.”

John Amores led five JRU players in double-digit scoring in the loss with 19 points, 6 boards, and 3 steals as Agem Miranda backstopped with 18 points, 6 assists, and 5 rebounds.

Meanwhile, the LPU Pirates bounced back from its opening game loss to CSB with a 76-67 win over the Mapua Cardinals in the second game of the double-header.

John Barba led all scorers with 16 points on an efficient 6-of-8 clip, while Mac Guadaña added 13 points, 3 assists, 3 steals, and 2 rebounds in the victory.

Paolo Hernandez matched Barba in the loss with 16 points and just missed out on a double-double finish with 9 boards. Toby Bryan Agustin and Warren Bonifacio each scored 12, but the Cardinals were held to just 29% shooting overall as they failed to build on their opening day win against San Beda.

NCAA action continues on Friday, September 16, with a 12 pm curtain-raiser between Arellano and Perpetual. Meanwhile, CSB will look to win its second straight game at 3 pm against scrappy San Sebastian.

LPU is set for a big test on Saturday, September 17, as it figures in a 3 pm showdown with former finals foe San Beda, while Letran will return to action on Sunday, September 18, with a 12 pm game against Arellano.