“The Samahang Basketbol ng Pilipinas strongly condemns acts of on-court violence in basketball, whether it is directed towards a player, an official or a fan,” the statement read.

The federation reached out to NCAA Trustee to the SBP Board Dax Castellano and SBP regional director Paul Supan of its “serious concern over the unwanted incident” between Amores and CSB that necessitated “the halting and cancellation of the game altogether.”

The 23-year-old made headlines far and wide after initially charging at a CSB fan all the way from JRU’s side of the court before turning his attention to the Blazers players, and hitting Mark Sangco, Jimboy Pasturan, Taine Davis, and Migs Oczon, in that order – injuring Pasturan and Davis in the process.

Castellano and Supan, NCAA Management Committee representatives of CSB and JRU, respectively, “discussed the shared view of condemning on-court violence, adoption of preventive measures to avoid a repetition of the deplorable incident, including a review of security protocols, and meting out the necessary sanctions in a fair manner,” the statement read.

On top of Amores being suspended indefinitely by both JRU and the NCAA, the league also handed out at least one-game bans to 13 other players involved in the fracas – 10 from JRU and three from CSB.

Although no apology was personally made by Amores as of posting, his university has apologized on his behalf in the same statement that announced he was being suspended for the rest of the season.

With at least one playing year left, the former NCAA high school Most Improved Player can still play next season if ever his suspension is lifted by the league, which has left the door open for reinstatement by not giving an outright ban.

“We in SBP are one with NCAA in its direction to proactively take the appropriate steps to move the league forward in a professional manner and positively address the issues at hand for the benefit of NCAA and the sport of basketball,” SBP’s statement concluded. – Rappler.com 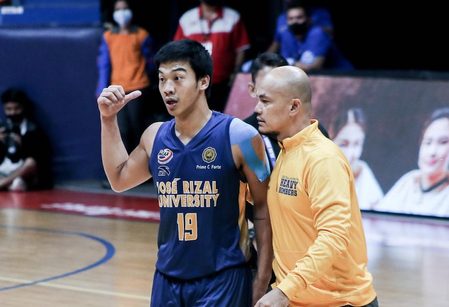