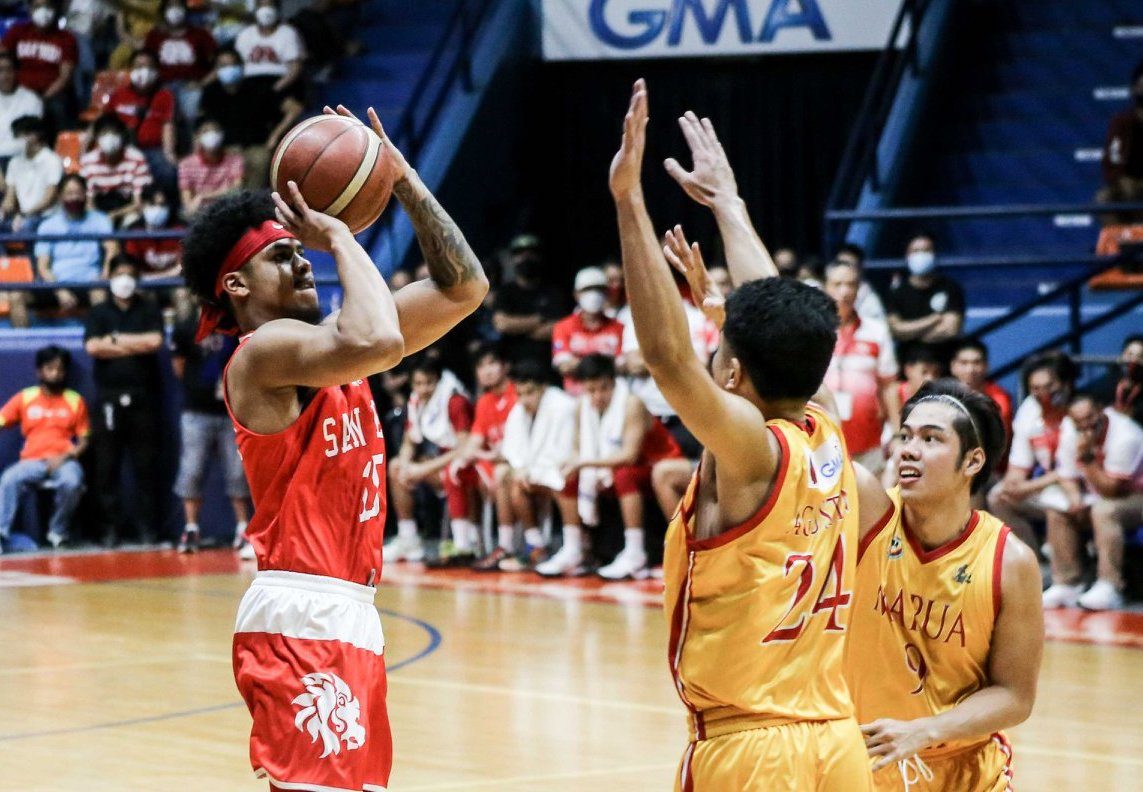 STEP UP. James Kwekuteye bucks an ankle injury and leads San Beda in scoring in a clutch win over Mapua.

MANILA, Philippines – San Beda stayed in the NCAA Season 97 finals hunt after avoiding elimination with a come-from-behind 73-67 overtime win against Mapua at the San Juan Arena on Sunday, May 8.

Ralph Penuela came through in regulation and in extra period, finishing with 13 points and sinking a pair of clutch shots as the Red Lions survived another day by overhauling a 10-point deficit.

On the verge of missing the NCAA finals for the first time since Season 81 after trailing 38-48 early in the fourth quarter, the Red Lions unloaded a 22-12 run led by Penuela and Kwekuteye to force overtime.

Penuela and Kwekuteye scored 9 and 5 points, respectively, during that stretch as botched free throws prevented the twice-to-beat Cardinals from reaching the finals in one try.

Mapua still led 59-58 after a tough Warren Bonifacio jumper and had a chance to make it a three-point game, but Brian Lacap split his free throws, allowing Penuela to extend the match.

Earlier defying the instruction of coach Boyet Fernandez in a failed attempt for the go-ahead bucket, Penuela redeemed himself as he sank a putback off a Kwekuteye miss to tie it at 60-60 with 2.8 ticks left in the fourth.

Penuela then dished out a no-look pass to Kwekuteye for the first basket in extra time and scored a layup in a 7-0 run San Beda used to stun Mapua.

A pair of Lacap free throws knotted the score at 64-64 before Peter Alfaro dialed up from the right corner to give the Red Lions a 67-64 edge.

Buckets from Penuela and JB Bahio with two minutes left followed as they stretched their lead to 71-64 and the Cardinals never recovered.

Shrugging off an ankle injury he suffered in their play-in win over St. Benilde, Kwekuteye topscored for San Beda with 17 points on top of 4 assists, 4 steals, and 1 block.

Jacob Cortez, the son of former PBA star Mike Cortez, chimed in 13 points and 4 rebounds in the win, while Bahio and Peter Alfaro tallied 9 points apiece and combined for 21 rebounds.

Bonifacio led the game in scoring with 18 points to go with 13 rebounds and 3 blocks for Mapua, which will get another shot at a finals berth in the knockout game on Wednesday, May 11.

The winner of the series will battle the unbeaten Letran Knights, who clinched the first title berth after escaping the Mapua Cardinals, 77-75, in the other semifinal pairing.