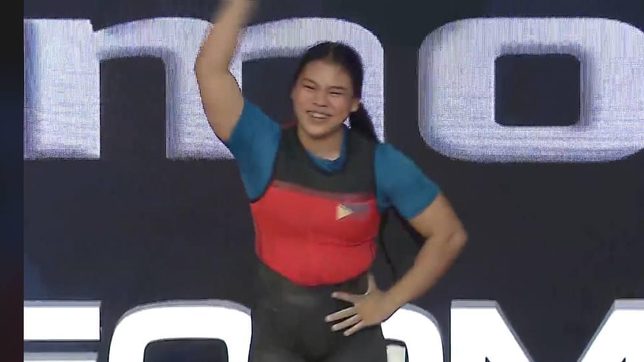 PRODIGY. Eighteen-year-old Vanessa Sarno has a chance of making it big in world weightlifting.

The Philippines’ young weightlifters wrapped up their campaign in the International Weightlifting Federation (IWF) World Championships with no medals, but still impressed by setting a couple of national records.

“We did not get any medal this time around, but if the Paris Olympics 2024 were held today, five of our weightlifters sent to the [world championships] this week would qualify,” said Samahang Weightlifting ng Pilipinas (SWP) president Monico Puentevella, noting that some of the lifts matched the Olympic qualifying marks.

Teen rising star Vanessa Sarno had the highest chance for a podium finish but settled for fifth place when she was stuck in a three-way logjam. The 2020 Asian champion lifted a total of 231 kg in the women’s 71kg event, the same mark as Sweden’s Patricia Strenius and American Olivia Reeves. But the Filipina lost via countback when she recorded 103kg in the snatch, which was lower than her competitors’ 104kg.

The 18-year-old Sarno, though, erased her own national records set in the Asian Championships last April. Her 103kg mark in the snatch eclipsed her previous 101kg lift and surpassed her previous best of 229kg with a total lift of 231kg in the world championships.

In the men’s team, John Fabuar Ceniza and Fernando Agad made it to eighth place, which is the Olympic qualifying mark.

Weightlifting’s fate in the Paris Olympics still remains uncertain as the international federation is under investigation for alleged doping cases from banned countries Romania, Thailand, and Malaysia.

Despite the uncertainty, Puentevella hopes to see a number of budding weightlifters join Philippine Olympic gold medalist Hidilyn Diaz in the quadrennial meet.

“With enough luck, training, and more exposure, we might be able to qualify four to five females in Paris, including Hidilyn Diaz, in case she decides to continue her golden journey. Onward to Paris 2024,” added the SWP chief.

Diaz skipped the world championships and will just focus on preparing for her golden defense in the Vietnam Southeast Asian Games in May 2022. – Rappler.com