EMBATTLED. Serbian tennis player Novak Djokovic practices at Melbourne Park as questions remain over the legal battle regarding his visa to play in the Australian Open.

Facebook Twitter Copy URL
Copied
‘I want to emphasize that I have tried very hard to ensure the safety of everyone and my compliance with testing obligations,’ says world No. 1 Novak Djokovic 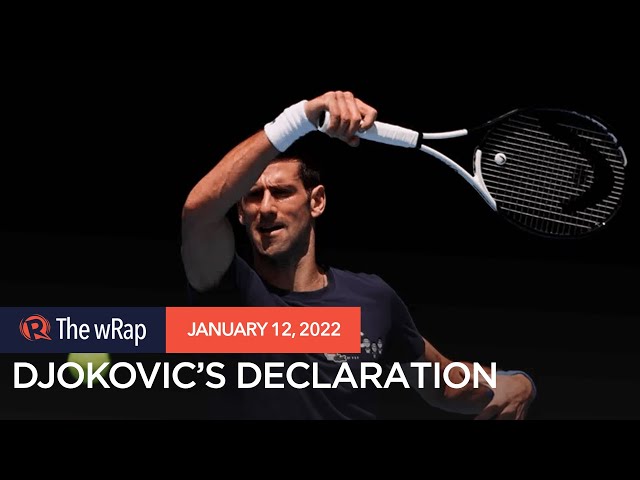 MELBOURNE, Australia –Tennis star Novak Djokovic released a long statement on Wednesday, January 12, with details on why he was not in isolation after testing positive for COVID-19 in December and saying his agent made a mistake in filling out his Australian travel declaration.

The statement came as Australia’s Immigration Minister Alex Hawke was considering whether to cancel the world No. 1 tennis player’s visa ahead of the Australian Open, which starts on January 17, amid controversy over whether he was eligible for a medical exemption from the country’s COVID-19 vaccine requirements.

“I want to emphasize that I have tried very hard to ensure the safety of everyone and my compliance with testing obligations,” Djokovic said in a statement on his Instagram account.

Amid questions about his Australian Travel Declaration where he had to state whether he had travelled within 14 days of coming to Australia, he said his agent accidentally ticked the wrong box on the form.

“On the issue of my travel declaration, this was submitted by my support team on my behalf – as I told immigration officials on my arrival – and my agent sincerely apologies for the administrative mistake in ticking the incorrect box about my previous travel before coming to Australia,” Djokovic said.

Djokovic’s lawyers have provided a lot more information relevant to his visa, which will impact the timing of a decision by Australia’s immigration minister on whether to cancel the visa, the minister’s office said on Wednesday.

“Naturally, this will affect the timeframe for a decision,” he said.

Djokovic is in Australia to play in next week’s Australian Open. The federal government canceled his visa when he landed, on the grounds he has not had a COVID-19 vaccination and his medical exemption was not satisfactory.

A judge on Monday quashed that decision after Djokovic made a successful legal challenge. But the Australian government said it was considering whether to use discretionary powers to cancel Djokovic’s visa.

Djokovic’s father, Srdjan Djokovic, responding to Reuters questions, sent a statement which said: “If anything had not been cleared up as some journalists stipulate, the verdict would have been different.”

Before boarding his Emirates flight to Melbourne, Djokovic – like all travelers to Australia – was required to fill out a form called an Australia Travel Declaration.

Among the questions on that form, Djokovic or his representatives had checked a box stating that he had not, or would not, travel in the 14 days prior to his flight to Australia, according to a copy of the completed form submitted to the Australian federal court by his lawyers as part of his legal challenge.

Djokovic told Australian authorities that when he arrived in Australia on January 5, he had traveled there from Spain, according to documents his lawyers submitted to the court and seen by Reuters.

In order to have not traveled in the 14 days prior to his flight to Australia, Djokovic needed to have been in Spain from December 23 at the latest.

Asked to comment on whether it was investigating if Djokovic’s form contained misleading information, the Australian Border Force said it did not comment on operational matters.

It said that as part of Australia’s response to the COVID-19 Omicron variant, it is an enforceable requirement that travelers, among other things, “make a declaration setting out their travel history for the 14 days before their scheduled flight.” – Rappler.com