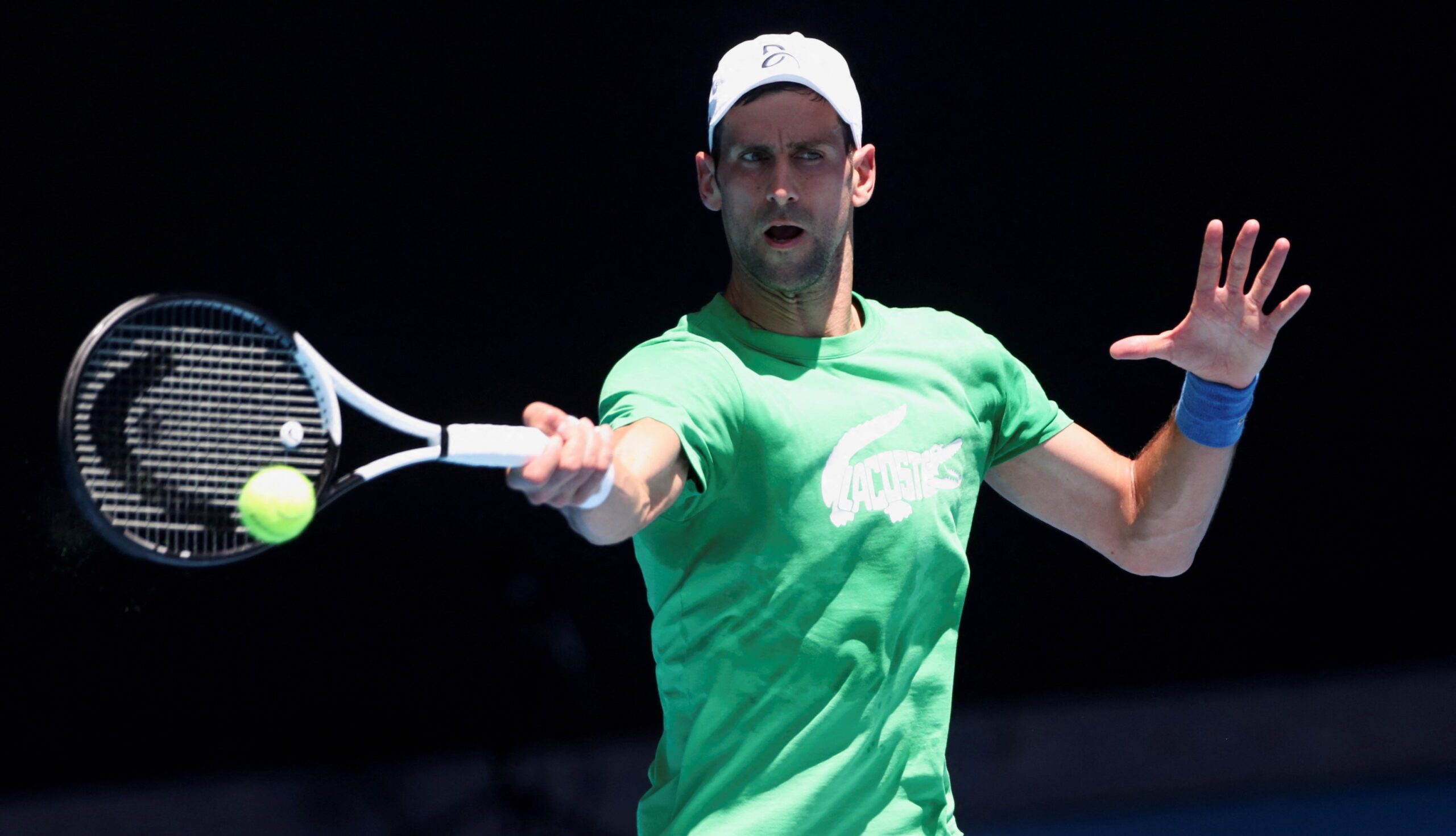 IN PERIL. Novak Djokovic is in danger of not being allowed to play in the Australian Open.

MELBOURNE, Australia – Novak Djokovic will spend Saturday night, January 15, in immigration detention before the world’s tennis No. 1 seeks a court ruling to stop his deportation and keep alive his bid for a record 21st major title at the Australian Open.

Djokovic arrived at Melbourne’s Park Hotel, the same immigration detention hotel where he was held last week, according to a Reuters witness.

About a dozen refugee activists chanted “stop the torture… let them out” as Djokovic and Border Force guards drove into the underground garage of the hotel, which is also being used to hold 33 asylum seekers and travelers in COVID-19 quarantine.

A man cycling past the hotel shouted: “Go home, Novak!”

It will be a second stint in detention for Djokovic, who spent his first four nights in Australia in hotel detention before a judge freed him on Monday after finding a decision to cancel his visa on arrival had been unreasonable.

Immigration Minister Alex Hawke decided to cancel the Serbian superstar’s visa because his presence could foster opposition to COVID-19 vaccination in Australia, court documents released after an initial hearing in the Federal Court on Saturday showed.

“Although I … accept that Mr. Djokovic poses a negligible individual risk of transmitting COVID-19 to other persons, I nonetheless consider that his presence may be a risk to the health of the Australian community,” Hawke said in a letter to Djokovic and his legal team.

This explanation in Djokovic’s affidavit is more detailed than the brief statement Hawke released on Friday, which said his decision was based on “health and good order grounds.”

Justice David O’Callaghan set a hearing on Djokovic’s appeal on Sunday, with the question of whether it would be held before a single judge or a full court still to be determined.

Djokovic’s lawyers said on Friday they would argue deportation would only further fan anti-vaccine sentiment and would be as much a threat to disorder and public health as letting him stay and exempting him from Australia’s requirement that all visitors be vaccinated.

A court order on Friday night had required the 34-year-old to surrender to immigration officials for an interview on Saturday morning, before he would be taken to his lawyers’ officers for the preliminary hearing. After leaving his lawyers, he was to be taken into immigration detention.

Border Force and the immigration minister’s office did not immediately respond to requests for comment on whether Djokovic had attended the interview.

The government has said it would not deport Djokovic until his appeal has been heard. Djokovic wants to be able defend his title at the Australian Open, which begins on Monday.

The controversy has overshadowed the traditional build-up to the Grand Slam event and players were tiring of the saga.

“Honestly I’m little bit tired of the situation because I just believe that it’s important to talk about our sport, about tennis,” Spaniard Rafa Nadal, who is tied on 20 major titles with Djokovic, told reporters at Melbourne Park, where the event will be played.

German Alexander Zverev, the world No. 3, said Djokovic had been treated unfairly and that the Serb might have been used as a political pawn by Australian authorities, something Canberra has denied.

“This is obviously not a nice thing for everyone, for him especially. But don’t question his legacy because of this,” Zverev said.

Djokovic’s medical exemption from vaccine requirements to play the Open prompted enormous anger in Australia, which has undergone some the world’s toughest COVID-19 lockdowns and where more than 90% of adults are vaccinated, but hospitalisation rates continue to hit record highs.

With global scientists and policymakers focused on vaccinating as many people as possible to end the pandemic, the refusal of Djokovic to get the jab has fuelled the anti-vaccination movement, especially in his native Serbia and surrounding countries.

The controversy over the tennis player has become a political touchstone for Prime Minister Scott Morrison as he prepares for an election due by May.

His government has won support at home for its tough stance on border security during the pandemic, but it has faced criticism for its handling of Djokovic’s visa application.

Djokovic, scheduled to play fellow Serb Miomir Kecmanovi in the first round of the Open, is hunting a record-breaking 21st Grand Slam title. But instead of hitting Rod Laver Arena on Monday, he could be deported on a flight out of Melbourne.

He has the option of withdrawing and leaving Australia of his own accord.

“Australian Open is much more important than any player,” said Nadal, whom Djokovic considers his greatest rival on a tennis court.

“If he’s playing finally, OK. If he’s not playing, Australian Open will be great … with or without him.” – Rappler.com