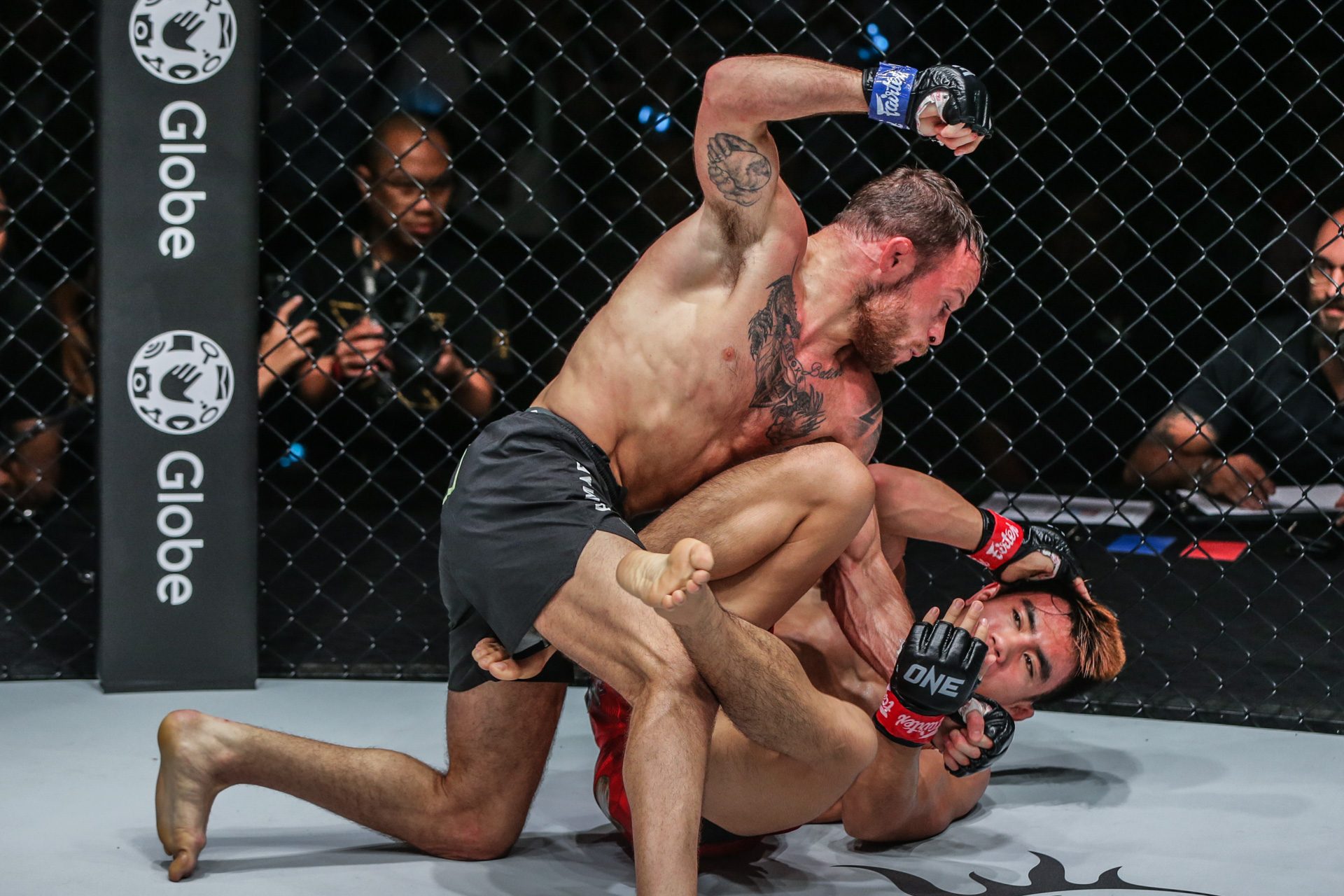 STRIKE. Jarred Brooks pounces Joshua Pacio to the ground during their ONE 164 bout.

MANILA, Philippines – The Filipino crowd experienced an emotional rollercoaster as Joshua “The Passion” Pacio (19-4) fell short of defending his ONE strawweight title against Jarred “The Monkey God” Brooks (20-2) in ONE 164 on Saturday, December 3 at Mall of Asia Arena.

Pacio showcased an impressive takedown defense and started to work on Brooks’ body midway through the fight.

However, the American wisely shifted gears, abandoned his grappling, and focused on his flashy striking that was left unanswered by Pacio.

The fourth round was huge for Brooks as he punished the Filipino’s spinning attack with a beautiful takedown. Brooks then threw heavy blows and connected a tight choke attempt in the last seconds of the round.

While Pacio survived the submission attempt, Brooks continued to fight smart and closed all the windows of opportunity for Pacio, who saw the title slip from his hands through the judges’ scorecards.

“You just witnessed The Truth Vera’s last fight. Thank you for all the love. I’ll be around, kitakits (see you),” said Vera while holding his gloves in front of a standing ovation given by the Filipino crowd.

Similar to his fight against Arjan Bhullar last year, Vera was nowhere near his champion form when he squared up against Aliakbari.

The Iranian took the fight to the ground where Vera basically gave up his back and took all the blows thrown by Aliakbari.

It was the third straight knockout loss of the 45-year-old Vera.

In an all-Filipino bout, Jhanlo Mark “The Machine” Sangiao (5-0) put Team Lakay in the winning column as he submitted Anacleto Lauron (1-1) with a rear-naked choke in the opening round of the fight.

Lauron tried to pull off a quick finish with his running knee attempt, but Sangiao wisely punished the wild sequence and slammed Lauron to the ground.

Sangiao then worked for a body lock and eventually connected a slick choke that forced Lauron to tap.

With his stellar showing, the 20-year-old fighter became the first Team Lakay fighter to receive a $50,000 bonus from ONE Championship for winning Performance of the Night.

It was Sangiao’s fourth straight victory with a rear-naked choke finish.

Jeremy “The Juggernaut” Pacatiw (11-5) also impressed with his striking prowess and submission finish against Tial “The Dragon Leg” Thang (3-2, 1NC).

Defense seemed to be illegal with both fighters just letting everything go in the opening round. Pacatiw looked dominant on the feet and connected more solid shots compared to Thang, who basically absorbed every blow from the Filipino.

The action did not stop in the second round, but Pacatiw worked his way around and connected a slick triangle submission that finally cracked the durable Thang.

Pacatiw, who came from a loss against the bantamweight’s top contender Fabricio Andrade, also won the second $50,000 performance bonus for Team Lakay.

Drex “T-Rex” Zamboanga (10-5) edged out Adonis Sevilleno (2-3) in a tightly contested match to make it 2-0 for the Zamboanga fighters in Manila.

The second all-Filipino bout of the night turned into a surprising grappling match as Sevilleno controlled Zamboanga on the ground for the most part of the opening round. Sevilleno then found a slick rear-naked choke attempt, but Zamboanga managed to slip out.

The tables turned in the second round with Zamboanga coming out on top of the grappling exchange and even tried to connect a premature rear-naked choke, which Sevilleno easily shook off.

Both fighters looked gassed in the final round, but it was Zamboanga who did more damage on the ground that led to a unanimous decision victory.

“Wolf Warrior” Yong Hu (10-4) simply overpowered former ONE flyweight champion Geje Eustaquio to grab a KO victory in the opening round of the fight (14-9).

Eustaquio immediately felt the power of the Chinese fighter, who landed a solid right hand that floored the former champ early in the fight.

The Filipino, though, fought back and used his grappling to survive Hu’s onslaught. But it was only a matter of time as Hu got back on his feet and landed another powerful right straight that shut the lights out for Eustaquio.

Eustaquio, who won his last two fights, came from a two-year layoff.

The night started rough for Team Lakay as China’s Meng Bo (20-6) knocked out Jenelyn Olsim in less than 30 seconds of the opening bout.

Bo landed a slick right hook followed by a vicious ground and pound to finish Olsim, who came from a decision win against Julie Mezabarba last June. – Rappler.com