Jeremy Miado on Danial Williams clash: ‘I expect a finish’ ON TOP. Jeremy Miado has transformed into one of the most promising strawweight fighters in ONE Championship.

MANILA, Philippines – Filipino knockout artist Jeremy “The Jaguar” Miado is targeting his fourth straight win in ONE Championship Circle, and he’s doing so against his toughest opponent yet.

Waiting for him is fifth-ranked “Mini T” Danial Williams in a crucial strawweight MMA tussle on the main card of ONE Fight Night 3: Lineker vs. Andrade on Saturday, October 22, at the Axiata Arena in Kuala Lumpur, Malaysia.

Williams has transitioned from being an excellent muay thai fighter to one of the most promising strawweights in the promotion, and Miado can’t wait to test himself against the Aussie.

“I believe he’s faced a higher quality of opponents when it comes to solely striking, but if we’re going to talk about mixed martial arts then I believe I’m more experienced than him, and that’s something that I have over him,” he said.

“Don’t get me wrong,” he continued, “he’s got power in his hands, but I think mine are quicker.” 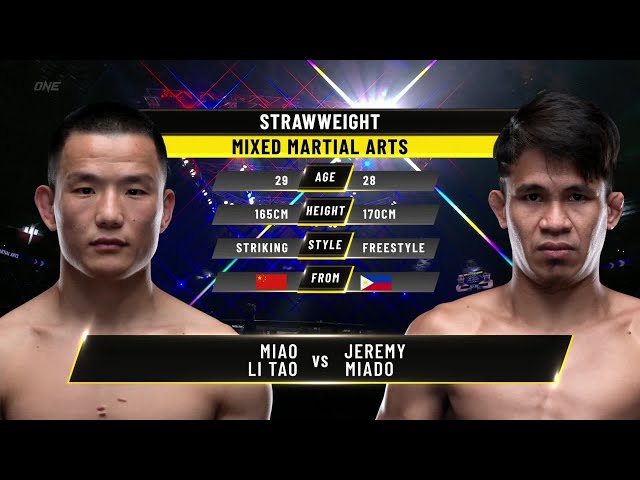 Williams’ striking prowess might actually push Miado to utilize his wrestling. It’s something that he’s been working on ever since moving to Thailand to train at Marrok Force.

While Miado is also known for his devastating striking, he’s been actively improving the other facets of his game – ground game and wrestling included.

That said, the Filipino is not going to actively look for takedowns and won’t let his opponent dictate the fight on that night.

“It really depends on where this match ends up. I’ll be ready for him. If there’s a chance for me to go for a takedown and it will be advantageous for me, then I’ll take him down,” he said.

“But if I feel like I’m ahead in striking and I feel comfortable, then why would I take him down? It will depend on how the momentum of the match is playing out.”

Regardless of where the match does end up, Miado promises a finish over Williams in this clash.

“This will be a very good fight. You better not miss this. This one’s going to be a fight between two men who are willing to throw hands. I expect a finish. I’ll end it with either a KO or TKO.” – Rappler.com