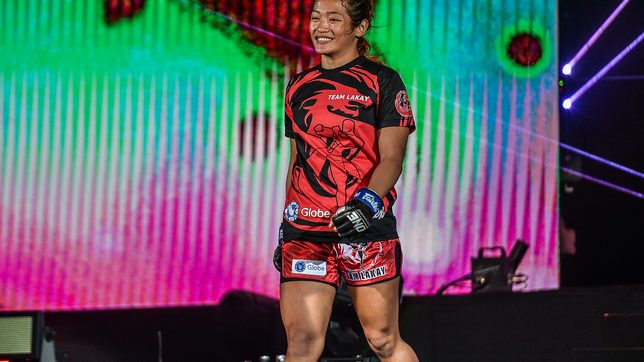 BOUNCE BACK. Jenelyn Olsim gets back to work.

Olsim got outclassed by Phogat’s dominant wrestling en route to a unanimous decision loss in the ONE Women’s Atomweight World Grand Prix semifinals at ONE: NEXTGEN on October 29.

While letting a big opportunity slip is tough for the 24-year-old, her soft-spoken mentor believes that this could be good for her in the long run.

“What Ritu did in the Circle, that was what we were preparing for. She uses overhand rights and then goes for takedowns, and that’s what she did,” Sangiao said.

“We thought Jenelyn was ready for that style because we prepared, but it’s done, it is what it is, and this is a big lesson for Jenelyn moving forward.

“That match was proof that Ritu is a world-class wrestler. We all knew what she was going to do, and we prepared for it, but we still came up short. So, now it’s all about learning from it.”

Sangiao also tipped his hat to Phogat, especially with how great the Indian’s wrestling was compared to Olsim’s, showcasing the difference between practicing at the gym and being experienced.

It’s not as if Olsim wasn’t prepared. She was doing everything to near perfection during training, but as she found out, it’s different in the actual match.

“It’s back to the drawing board. No matter how much you know the technique of your opponent, you just have to keep on working, keep on repeating it, until it becomes muscle memory for you,” Sangiao said.

“There were times during training that even our men fighters couldn’t take Jenelyn down, but during the match she got easily taken down over and over again. I think she forgot the small details. So, she just has to review [them] and repeat [them].”

Moreover, how Olsim reacted after the match speaks volumes of her character, and Sangiao likes what he sees from her.

While the Team Lakay rising star wore a strong face in her post-match interviews, taking the loss in stride and congratulating Phogat, Sangiao shared the frustration that Olsim felt afterwards. And the only piece of advice that he gave Olsim was to stay the course, no matter how hard it gets, because it is going to get harder.

“After the match Jenelyn couldn’t really sleep. She just kept thinking about what went wrong and what she could have done to be better,” Sangiao said.

“Prior to this, she told me she wanted to go all the way and take the belt, but it’s not easy, it takes time – but that attitude will be key for her in getting what she wants.”  – Rappler.com

ONE Championship returns with the previously recorded ONE: NEXTGEN II on One Sports or One Sports+ at 8:30 pm Philippine time on Friday, November 12. It will air simultaneously on the ONE Super App and ONE’s YouTube channel .