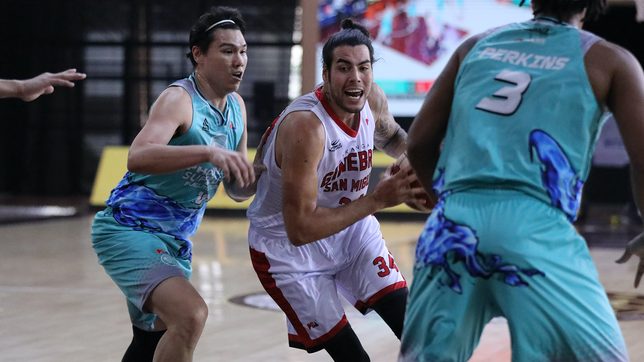 COMEBACK. Barangay Ginebra last tasted victory after beating Phoenix in a win where it fought back from a 19-point deficit.

Barangay Ginebra gets another crack at keeping its title-retention bid in the PBA Philippine Cup running.

Ginebra avoided elimination and set up a playoff against Phoenix for the last quarterfinal berth after NorthPort crushed Alaska in the final elimination-round game on Thursday, September 23.

Its playoff bid already out of its control following a 66-79 loss to Meralco on Thursday, Ginebra needed NorthPort to beat Alaska to stay alive.

NorthPort delivered with a 122-94 blowout as Ginebra wound up in a three-way tie with Phoenix and Terrafirma at 4-7 for a share of the eighth spot that comes with the last quarterfinal seat.

Only Ginebra and Phoenix, though, advanced to the one-game playoff due to a superior quotient over Terrafirma, which missed the quarterfinals for the 11th straight conference.

A NorthPort defeat would have established a four-way logjam at 4-7 among Alaska, Ginebra, Phoenix, and Terrafirma.

In that scenario, Alaska and Ginebra would get the boot and finish at 10th and 11th place, respectively, due to an inferior quotient, while Phoenix and Terrafirma would battle for the No. 8 seed in the quarterfinals.

But after ending the eliminations with back-to-back losses, Ginebra needs to get its act together as it tries to keep its playoff streak intact.

According to PBA chief statistician Fidel Mangonon, Ginebra has advanced past the elimination round for 38 consecutive conferences.

Interestingly, Ginebra last tasted victory after toppling Phoenix on September 15 in a win where it fought back from a 19-point hole.

Ginebra and Phoenix fight for their tournament lives in a do-or-die playoff on Saturday, September 25, with the winner facing top seed TNT in the quarterfinals. – Rappler.com