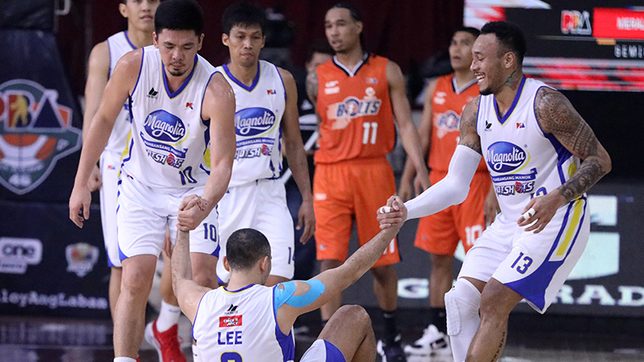 Calvin Abueva bolstered his quest for his second PBA Best Player of the Conference plum after retaining the top spot in the statistical battle at the end of the Philippine Cup semifinals.

Abueva, who led in statistical points after the eliminations and quarterfinals, averaged 34.2 SPs as he helped propel Magnolia back to the finals for the first time in two years.

“The Beast” averaged 13.8 points, 8.5 rebounds, 3 assists, and 1.2 steals in their six-game semifinals conquest of Meralco.

Posing as the closest contender to Abueva is his Magnolia teammate Ian Sangalang, who ranks third in SPs with 33 built on averages of 16.7 points, 8.8 rebounds, and 1.4 assists.

Sangalang proved to be a double-double machine in the semifinals after putting up 16.6 points, 10.7 rebounds, and 1.7 assists.

NorthPort ace Robert Bolick remained in the top three in SPs at second place with 33.7, although he is unlikely to win his maiden BPC as his team did not make it past the quarterfinals.

TNT super rookie Mikey Williams slipped from second to fourth with 32 SPs after his scoring dipped to 16.2 points on top of 4.4 rebounds and 4.4 assists.

Williams struggled in some parts of the semifinals, but saved the best for last after tallying 20 points, 8 rebounds, and 6 assists in a do-or-die Game 7 as TNT edged San Miguel for the last finals seat.