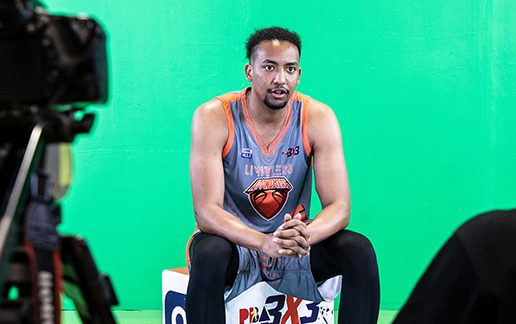 PBA ACTION. Brandon Ganuelas-Rosser will suit up for the Limitless Appmasters in the PBA 3x3.

Filipino-American Brandon Ganuelas-Rosser welcomed the news of the PBA relaxing its eligibility rules for Fil-foreigners months after he was ruled ineligible for the PBA draft.

Ganuelas-Rosser joined the previous draft but did not make the final list due to incomplete papers as the PBA required Fil-foreigners to submit documents from the Department of Justice and the Bureau of Immigration.

Now, Ganuelas-Rosser and other Fil-foreigners only need to have a Philippine passport to become eligible for the PBA draft.

“I’m really happy. It was something that I think should have been done a long time ago but I’m glad that it was done now,” Ganuelas-Rosser said.

“I’m happy that the rule was changed, not just for myself but for Fil-foreign players who want to join the PBA.”

Another Fil-foreigner set to compete in the 3×3 league is TNT Tropang Giga guard Jeremiah Gray, who was also declared ineligible in the previous draft.

Ganuelas-Rosser will team up with Mike Gamboa, Jorey Napoles, and Reymar Caduyac in the team that serves as the affiliate of the Phoenix Fuel Masters.

“I’ve been a fan of the PBA for so long now, just watching my brother. To finally get my feet wet, I’m looking forward to it,” Ganuelas-Rosser said.

The PBA 3×3 tournament will finally kick off on Saturday, November 20. – Rappler.com