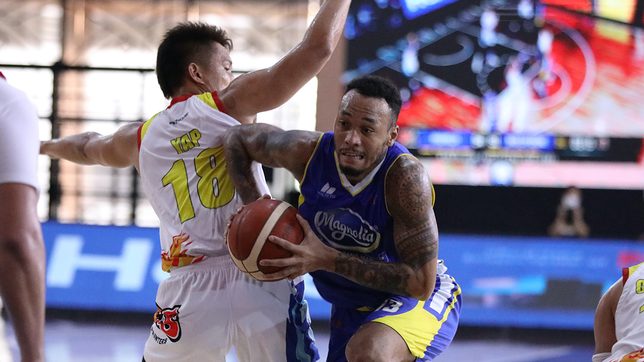 DO-IT-ALL. Calvin Abueva tops the statistical points standings as he finishes inside the top 10 in three of the five major statistical departments.

Facebook Twitter Copy URL
Copied
Calvin Abueva, Mikey Williams, and Robert Bolick all make a strong case for the Best Player of the Conference plum after starring for their respective teams in the elimination round of the Philippine Cup

There is no clear-cut favorite to win the Best Player of the Conference (BPC) award for the PBA Philippine Cup as Calvin Abueva, Mikey Williams, and Robert Bolick figure in a tight battle.

Only a small margin separate the three after their numbers were tallied at the end of the elimination round.

Magnolia’s Abueva topped the statistical points (SPs) standings with 35.36 SPs as he once again contends for the top individual honor in the all-Filipino conference.

One of the runner-ups for Philippine Cup BPC last season when he still played for Phoenix, Abueva ranked 10th in points (16.1), fourth in rebounds (9.7), and eighth in blocks (1.27) in helping Magnolia clinch the third seed.

Abueva also normed 3.1 assists and 1 steal as he edged TNT rookie Williams, who placed second in SPs with 35.30.

Williams has been a revelation this conference as he helped TNT finish the eliminations with a 10-1 record for the top seed, averaging a second league-best 18.4 points, 4.2 rebounds, 3.7 assists, and 1.2 steals.

Winning just one game in the Philippine Cup last season, NorthPort secured the fifth seed behind the fine play of Bolick, who finished the eliminations third in points and first in assists.

Not far behind in SPs were NorthPort rookie Jamie Malonzo (31.5) and Magnolia big man Ian Sangalang (31.3).

Ginebra’s Stanley Pringle, the reigning BPC, wound up at 14th with 28.3 SPs.

Conspicuously absent in the SPs standings was NorthPort big man Greg Slaughter, who averaged 16.5 points on top of league-highs 10.7 rebounds and 2.3 blocks.

Slaughter, who played in just six games, did not make the cut as only those who played 70% of their teams’ games were included.