Perez finally gets one over Bolick after past playoff heartbreaks 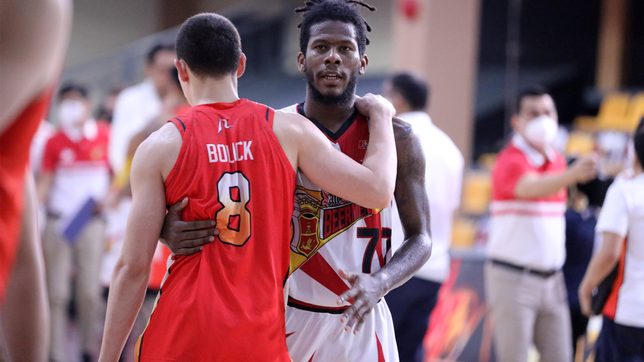 FRIENDLY FOES. CJ Perez and Robert Bolick have figured in a friendly rivalry since their collegiate careers in the NCAA.

The tables have turned for CJ Perez and Robert Bolick.

Perez finally got over the hump against Bolick as San Miguel swept NorthPort in their best-of-three PBA Philippine Cup quarterfinals clash with a 100-95 win on Thursday, September 30.

It was a rare occasion that Perez beat Bolick in a playoff series after the Lyceum product suffered back-to-back finals losses to the San Beda standout back when they still saw action in the NCAA.

“This is the first time I got one over Robert, so thank you Robert for giving me this one,” Perez said in Filipino.

Perez and Bolick figured in a friendly rivalry as Lyceum and San Beda met in the NCAA finals in 2017 and 2018.

Lyceum wrapped up the elimination round of the 2017 season with a rare 18-0 sweep only to fall short of the grand prize after falling prey to San Beda in two games in the best-of-three finale.

The two teams faced each other again for the championship in 2018, but Bolick and San Beda proved more experienced as they toppled Perez and Lyceum with another finals sweep.

Perez, though, got the last laugh this time, chalking up a team-high 21 points on top of 4 rebounds, 2 steals, and 2 blocks to key San Miguel to its first semifinal appearance in two years.

Bolick also had himself a terrific game with a near triple-double of 12 points, 14 assists, 8 rebounds, and 2 steals, but NorthPort just ran out of firepower to force a rubber match.

Up next for Perez and San Miguel is top seed TNT as they lock horns in a best-of-seven semifinals. – Rappler.com