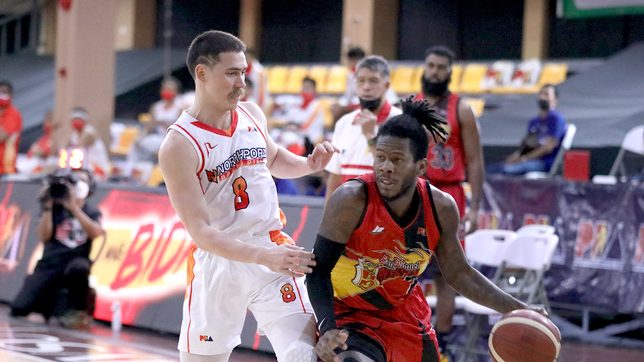 ON THE VERGE. CJ Perez and San Miguel are a win away from dispatching NorthPort in their best-of-three quarterfinals series.

CJ Perez took on whatever needed to be filled and helped San Miguel move on the cusp of a return to the PBA Philippine Cup semifinals.

A silent but deadly operator, Perez averaged 17.0 points, 6.0 rebounds, 2.5 assists, and 2.0 steals as San Miguel nosed out Alaska in the eliminations and survived NorthPort in their quarterfinals opener.

Perez led the way in a 101-100 escape against Alaska on Wednesday, September 22, with 20 points, 6 rebounds, 4 steals, and 3 assists, including the crucial dime to Marcio Lassiter for the game-winning three-pointer.

The win secured San Miguel the No. 4 seed in the quarterfinals and sent Alaska packing out of the semi-bubble in Bacolor, Pampanga.

Appearing in the playoffs for the first time, Perez then delivered 14 points, 6 rebounds, and 2 assists as San Miguel nipped NorthPort, 88-87, on Sunday, September 26, in Game 1 of their best-of-three quarterfinals series.

With his stellar play, Perez earned the nod for the PBA Press Corps Player of the Week for the period of September 22 to 26.

The former two-time scoring champion beat out teammates Mo Tautuaa, six-time MVP June Mar Fajardo, and Chris Ross for the weekly honor being given by the group regularly covering the PBA beat.

Perez has been a steady force in his first season with San Miguel as he ranked sixth in the Best Player of the Conference battle with averages of 17.2 points, 5.5 rebounds, 1.8 assists, and 1.4 steals. – Rappler.com