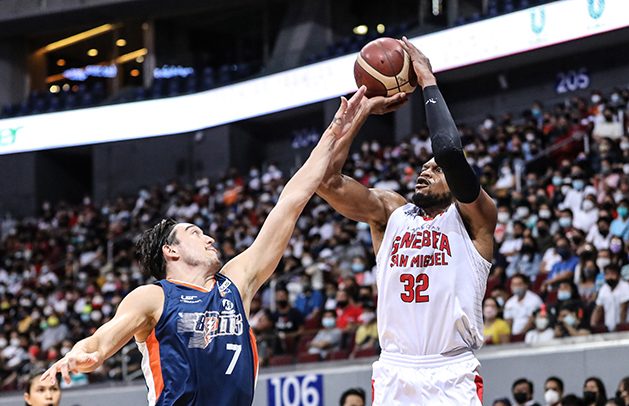 GIVING IT ALL. Cliff Hodge says he is merely playing hard to help Meralco finally get over the hump against Barangay Ginebra.

Facebook Twitter Copy URL
Copied
'I'm not going to try to injure anyone, ever, when I play,' says Meralco forward Cliff Hodge as fans accuse him of deliberately hurting Barangay Ginebra players in the PBA Governors' Cup finals

MANILA, Philippines – Meralco forward Cliff Hodge said he had no intention to cause harm following accusations from fans that he was deliberately hurting Barangay Ginebra players in the PBA Governors’ Cup finals.

The allegations came after Gin Kings import Justin Brownlee twisted his ankle in the second game of the best-of-seven series last Friday, April 8, after landing on the foot of Hodge, who closed out to contest a jumper.

Brownlee looked in deep pain after the incident but went on to finish the game, carrying Ginebra with a 36-point explosion en route to a 99-93 win that knotted the finals affair at 1-1.

“I’m not going to try to injure anyone, ever, when I play,” said Hodge after the Bolts bounced back on Sunday to seize a 2-1 series lead with an 83-74 victory in Game 3.

“We were both vertical and we both came down at the same time. So I did not know where his feet was going and he just accidentally landed on my foot. I felt bad that happened, but I apologized to him.”

“If you know me personally, I’m not trying to injure anyone. I would never do that personally.”

The energetic forward said he merely played hard to help Meralco finally get over the hump as he remained without a championship after 10 years in the PBA.

Hodge and the Bolts reached the Governors’ Cup finals in the 2016, 2017, and 2019 editions but fell short of the crown no thanks to Brownlee and Gin Kings coming out on top every single time.

“This is winning time. I never won a championship in 10 years and I’m going to keep playing as hard as I can.”

Hodge and Meralco successfully contained Brownlee in Game 3 as the Best Import front runner wound up with a conference-low 19 points.

Although Brownlee delivered all-around numbers with 15 rebounds, 7 assists, and 6 blocks, he made just 38% of his field goals, his second-lowest shooting percentage in the entire Governors’ Cup.

With Brownlee made to labor for his offense, the Bolts held the Gin Kings to their lowest scoring output in the conference after averaging 100.6 points in their first eight games in the playoffs.

Meralco looks to move on the cusp of its first PBA title in franchise history as it shoots for a 3-1 lead against Ginebra in Game 4 on Wednesday, April 13, at the Araneta Coliseum.

“We’re going to treat this like it is a Game 7. Just trying to come out with a win no matter what. Put our bodies, put our lives on the line, and just try to do whatever is possible to get the win,” Hodge said. – Rappler.com