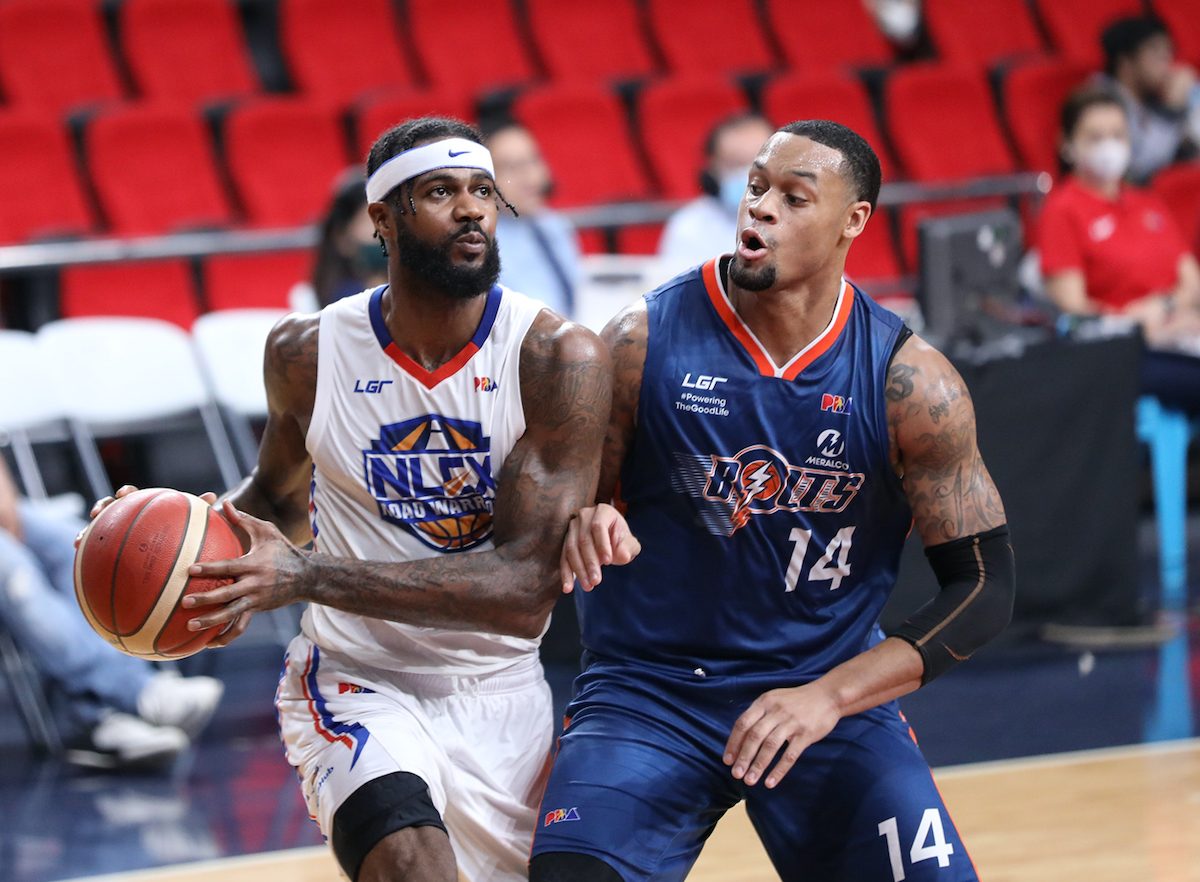 HEAVY LIFTING. Earl Clark turns in his fourth 40-point outing of the conference to keep NLEX in the running.

Facebook Twitter Copy URL
Copied
Buoyed by its upset of Ginebra, NLEX erases an 18-point deficit and rides on a blistering fourth-quarter run to remain in quarterfinal contention and eliminate Meralco

MANILA, Philippines – NLEX kept its quarterfinal bid in the PBA Commissioner’s Cup alive in come-from-behind fashion after turning back Meralco in a gutsy 92-81 win at the PhilSports Arena on Wednesday, November 30.

Earl Clark turned in his fourth 40-point outing of the conference as the Road Warriors erased an 18-point deficit and rode on a blistering run in the final 6:30 minutes to stay in the playoff hunt and eliminate the Bolts.

Buoyed by its upset of Ginebra that snapped a five-game skid, NLEX climbed to ninth place with a 5-7 slate and will need No. 8 Rain or Shine (5-6) to finish with the same record to arrange a playoff for the last quarterfinal berth.

Clark churned out 40 points, 11 rebounds, and 2 blocks as he anchored their 14-0 blast in the fourth quarter that took the fight out of Meralco.

The Bolts still led 77-74 off a KJ McDaniels layup before the Road Warriors strung 14 unanswered points, with 8 coming from Clark, to seize an 88-77 lead with under two minutes remaining.

Cliff Hodge ended the scoring drought for Meralco, but his bucket came too little too late as Clark sealed the win with a pair of free throws.

Reigning PBA Player of the Week Don Trollano backstopped Clark with 16 points and 9 rebounds, while Brandon Ganuelas-Rosser chimed in 10 points and 2 blocks.

Kris Rosales and Paul Varilla made their presence felt for NLEX with 6 and 5 points, respectively, and combined for 9 points in the final frame, where the Road Warriors outscored the Bolts 28-10 for their second straight victory.

Meralco guard Aaron Black came out with guns blazing and sizzled for 17 points in the first half – 14 in the opening quarter – as his side enjoyed a 57-39 lead at halftime.

But NLEX held Black scoreless the rest of the way as the Road Warriors dropped 53 second-half points on the Bolts, who managed to produce only 24 points in the last two quarters.

McDaniels delivered 22 points, 9 rebounds, and 4 blocks in the loss as he saw his playoff bid with Meralco dashed by his former team NLEX.

Slipping to 10th place with a 4-7 card, the Bolts will no longer contend for a quarterfinal spot even if they force a three-way tie with the Road Warriors and the Elasto Painters considering they lost to both teams in the eliminations.

Allein Maliksi added 12 points for Meralco, which will miss the playoffs for the first time since the 2019 Commissioner’s Cup.