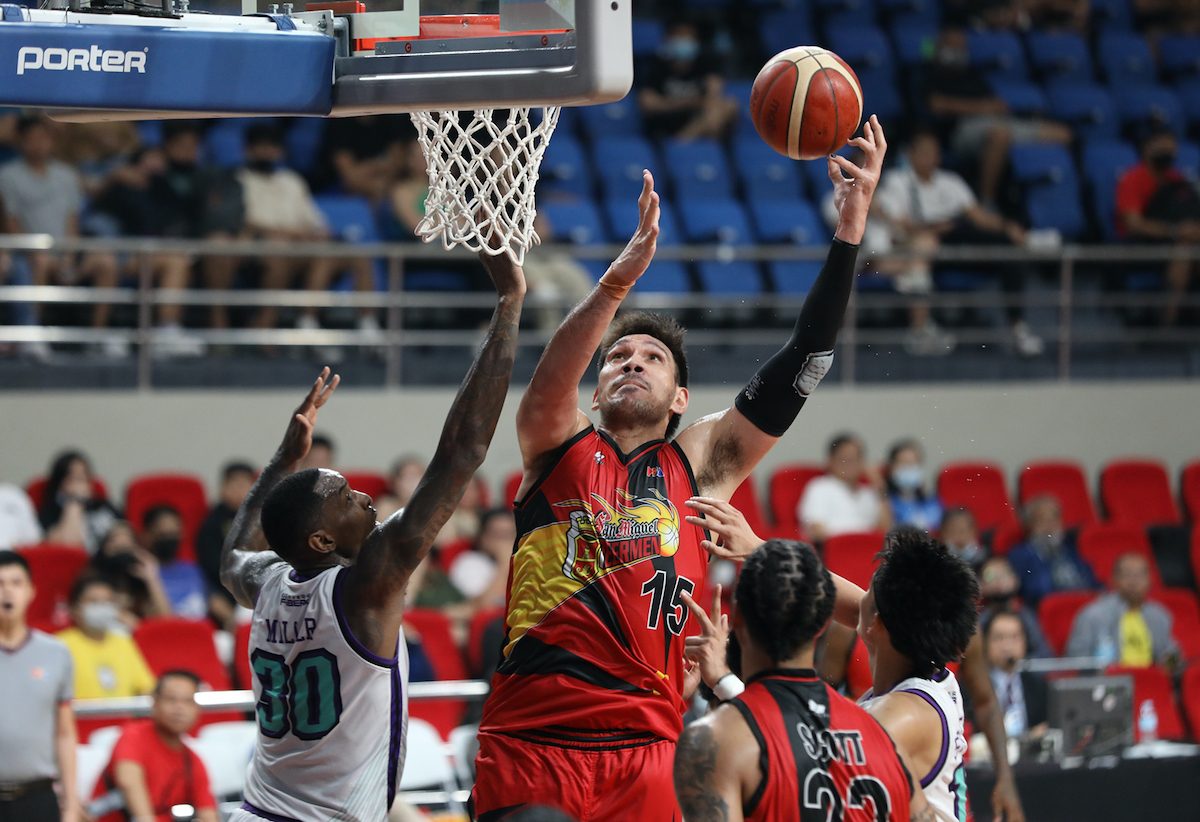 FINAL FOUR. June Mar Fajardo and San Miguel advance to the semifinals for the second straight conference this season.

MANILA, Philippines – San Miguel completed the final four cast of the PBA Commissioner’s Cup after completing a quarterfinal sweep of Converge with a wire-to-wire 120-107 win at the PhilSports Arena on Saturday, December 10.

June Mar Fajardo pulled the plug on the FiberXers’ comeback with key buckets late and flirted with a triple-double as the Beermen reached the semifinals for the second straight conference this season.

Converge trimmed what was once a 27-point deficit to single digits behind Quincy Miller with under three minutes remaining, 103-112, before Fajardo scored 5 points in an 8-0 run that practically sealed the win for his side.

The six-time league MVP turned in his finest game since his return from a month-long injury layoff, putting up 18 points, 18 rebounds, 7 assists, and 2 blocks in 35 minutes.

Import Devon Scott also produced a double-double of 20 points, 14 rebounds, and 5 assists, while Terrence Romeo led the Beermen in scoring with 22 points as he anchored their breakaway.

Romeo scattered 19 points in the middle quarters to help San Miguel mount a 97-74 advantage going into the final salvo before their lead peaked at 102-75 off a Fajardo basket.

Heroes were aplenty for the Beermen in their sixth straight win as Simon Enciso churned out 16 points, 7 assists, and 4 rebounds, Jericho Cruz fired 15 points, while CJ Perez chimed in 12 points, 8 rebounds, 4 assists, and 2 steals.

Jeron Teng topscored for Converge with 25 points alongside 10 rebounds and Miller posted 24 points – half coming in the fourth quarter – to go with 7 rebounds, 4 steals, and 3 blocks in the loss that ended his stellar PBA run.

It was a disappointing exit for the FiberXers after they dominated in the middle of the elimination round with a conference-best seven straight wins.

But the benching of Miller in a loss to NorthPort that snapped the Converge streak proved to be the turning point for the rookie franchise as it concluded the tournament with four consecutive losses.

Maverick Ahanmisi had 12 points, 9 rebounds, and 4 assists in the losing effort.