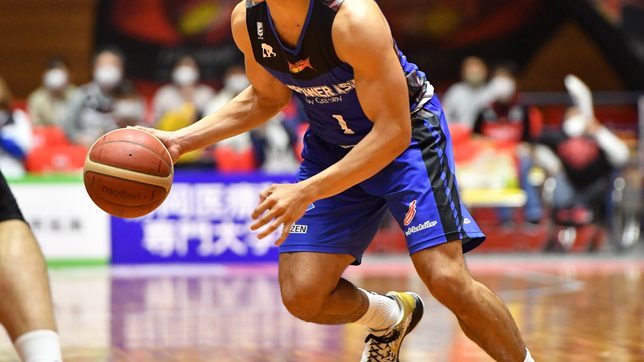 CAREER DECISION. Thirdy Ravena opts to stay in Japan and play for the B. League.

Facebook Twitter Copy URL
Copied
This rule is nothing more than a cop-out by an organization that cannot police its own ranks, and instead, applies pressure on young hoopsters

Thirdy Ravena was rewarded with a multi-year contract extension by his Japanese ballclub, the San-en NeoPhoenix. This development was welcomed by fans, most of whom believe Ravena is better off playing in a foreign professional league. But of course, the former King Eagle had to write to the PBA detailing why he was staying in the Japanese B. League.

It was said the letter was sent out of courtesy and had nothing to do with Ravena’s desire not to get banned by the PBA.

That Ravena felt compelled to explain himself to the PBA is in itself execrable because it shows how the league seemingly holds over the heads of players a Sword of Damocles in the guise of the “draft dodger” rule.

Rabid defenders of this policy have been saying that as a private entity, the PBA reserves the right to enact rules that it deems are necessary for its existence and operations. They also parrot the assertion of PBA officials that the rule protects the league from players who defer their draft applications so they would eventually get picked by teams of their choice or avoid getting selected by teams they do not want to join.

This rule is nothing more than a cop-out by an organization that cannot police its own ranks, and instead, applies pressure on young hoopsters who most likely will capitulate in the face of a threat of a lifetime ban.

It also is a misdiagnosis as the rule fails to address the root causes that have been plaguing the PBA which have led to the disenchantment of fans. What the PBA is trying to do is treat the symptoms but it fails to, or it refuses to, identify the site of the infection or the virus that brought about the symptoms.

In the NBA, top prospects are well aware that they will most likely be drafted by ballclubs coming from the bottom to the middle of the team standings. This affords these promising players the chance to become central pieces in the future plans of the squad as it seeks to improve in the long run.

What incentive is there for a blue chip Filipino prospect to get excited about being drafted by a bottom rung team in the PBA? The perennial tailenders who often get the top picks have given off the impression that they have very little intention of winning consistently or at the very least, rebuilding to become respectable.

How then do you explain Terrafirma giving up its franchise player CJ Perez, the 2020 Philippine Cup top scorer who averaged 24.36 points along with 6.8 boards and 4.2 assists, for a player from San Miguel Beer who did not see action the previous season plus two other Beermen who together combined for 4 points a game in 17 minutes of play?

If Terrafirma were bent on becoming relevant, they would have been parading this coming season a potential starting five of Christian Standhardinger, Roosevelt Adams, Perez, 2021 top pick Joshua Munzon, and possibly Juami Tiongson or Rashawn McCarthy. That’s a contender right there, only Terrafirma hardly ever showed interest in becoming one.

Also worth pondering is why Blackwater has very little to show for in terms of elite firepower after having shipped out Poy Erram, Bobby Ray Parks, Allein Maliksi, Mike Di Gregorio, and Paul Zamar, players who all shone while they were still with the ballclub.

The richer teams in the PBA have found ways around the rules to go up the draft order through conduits. It has become a test of creativity to justify how one franchise gives up a higher pick to a sister team or how the previous season’s most dominant team still gets to choose first in the draft.

The root of the issue is not so much that players defer their entry to the PBA but rather, the PBA’s inability to acknowledge that its member teams have through the years made a mockery of the draft system. Fans see right through it. The players are smart enough to see right through it. Yet league officials pretend it is not happening. Unable or unwilling to discipline the PBA franchises, they instead go after and try to intimidate the small fish, in this case the individual players who are still trying to carve their pro careers.

These kinds of head-scratching decisions and indecisions are no longer new to the PBA. The PBA and its member clubs have proven to be averse to progressive views and have been traditionally insular.

While other professional leagues in the region like the Japan B. League and the Korean Basketball League are opening their doors to other Asian players, are supportive of locals recruited by leagues outside their respective countries, and are open to revolutionary concepts like the East Asia Super League, the PBA still chooses to stick to unimaginative formats which have become as stale as a long, drawn-out Cardo Dalisay teleserye.

Japan B. League MVP Makoto Heijima had just signed a five-year deal in 2018 with a new ballclub, Link Tochigi Brex, when he was recruited by the Brisbane Bullets in the Australian National Basketball League (NBL). Yudai Baba, the 2019 B. League finals MVP, currently plays for the Melbourne United in the NBL. One wonders if June Mar Fajardo would be released if he were recruited to play abroad or if Kiefer Ravena will be allowed to pursue offers from the B. League.

While Japan recognized that Heijima and Makoto would gain from their exposure to higher levels of basketball in Australia which would benefit the B. League and its national team, the PBA considers these kinds of ventures as threats to its own survival.

The game of basketball is becoming borderless. Foreign leagues have opened their doors as they have discovered not just the talent of Filipino players but also the huge potential of the Philippine fan base. The PBA’s “draft dodger” rule could dissuade young Filipinos from exploring playing opportunities abroad. It is nothing short of a heartless attempt to close the doors that the likes of Thirdy Ravena and Kai Sotto have opened for other young Filipinos.

The PBA, most likely, will not budge and will not scrap this inane “draft dodger” rule. Egos as colossal as the Philippine Arena have made the PBA not very welcoming of criticisms from people who care about the game and the league. The PBA always acts to protect its own interests and that of its franchises. Who then will protect the interest of young players? Who then will protect the interest of the fans? – Rappler.com