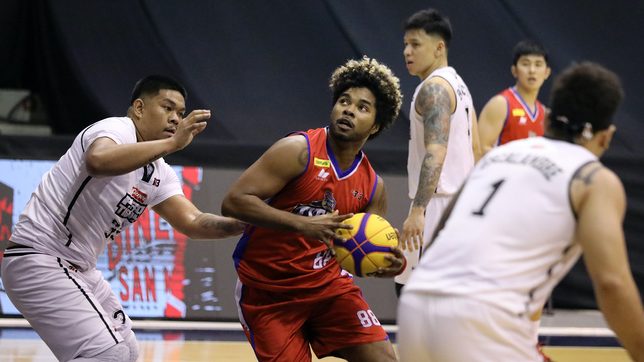 LEADING SCORER. Joseph Eriobu continues to pile up the points as he shows the way for Purefoods.

MANILA, Philippines – Purefoods rode on the momentum of its PBA 3×3 title run in the fourth leg as it wrapped up Day 1 of the fifth leg without a single loss to advance to the knockout round at the Ynares Sports Arena in Pasig on Saturday, December 11.

Joseph Eriobu, the PBA 3×3 leading scorer through the first four legs, showed the way anew with an average of 8.7 points as the TJ Titans trounced the NorthPort Batang Pier, Zamboanga Valientes, and Pioneer Pro Tibay to nail a 3-0 record for a share of the lead in Pool A.

Pioneer came close to taking down Purefoods but Eriobu rose to the occasion with 9 points, including the game-winning layup, to steer his side to a 21-20 squeaker.

The Limitless App Masters also emerged unbeaten in Pool A with a 3-0 card following wins over the Valientes, Batang Pier, and Pro Tibay to qualify for the quarterfinals.

Constantly improving through the first four legs, Limitless stamped its class over the competition with a whopping winning margin of 11.7 points.

The App Masters and the TJ Titans lock horns on Sunday, December 12, to determine the No. 1 team in Pool A.

Pioneer (1-2) and NorthPort (1-3) vie for the last quarterfinal berth available in Pool A, while Zamboanga (0-3) bowed out of contention as it remained winless in PBA 3×3 history, absorbing its 19th straight loss.

Over in Pool B, the Meralco Bolts and Terrafirma Dyip joined Purefoods and Limitless in the knockout stage with identical 2-0 slates following their respective wins over the Cavitex Braves and Barangay Ginebra.

Cavitex (0-2) and Ginebra (0-2) face off on Sunday to fight for their tournament lives, with the third-placer from Pools B and C figuring in a sudden death match for the eighth quarterfinal spot.

While four quarterfinal seats have been occupied from Pools A and B, it has become a tight race in Pool C despite Platinum Karaoke compiling a 2-0 record for the top spot.

Platinum is still in danger of falling to third place as the Sista Super Sealers (1-1) and San Miguel Beermen (1-1) can forge a three-way tie at 2-1.

Even winless TNT Tropang Giga (0-2), which replaced Martin Gozum with PBA player Chris Javier, have a slim chance to make it through the knockout round if they beat the Beermen in their final pool stage game on Sunday. – Rappler.com