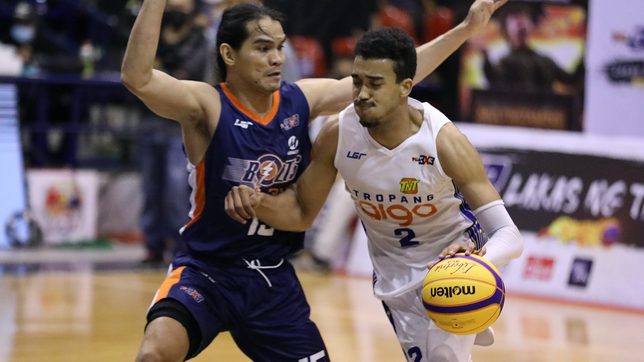 CLUTCH. Jeremiah Gray takes over late for TNT in its final win over Meralco.

TNT remained consistent with its winning tradition after capturing the title of the first PBA 3×3 leg following a gritty win over Meralco at the Ynares Sports Arena in Pasig City on Sunday, November 21.

The champions of the recent Philippine Cup, the Tropang Giga hacked out a 21-18 victory over the Bolts in the winner-take-all finale to complete their unbeaten campaign.

Jeremiah Gray scorched hot with 11 points and hit crucial buckets down the stretch as TNT won all of its seven games in the pool and knockout stages combined en route to taking home P100,000.

However, the title-clinching bucket proved to be elusive as Gray and Lervin Flores muffed their foul shots to keep the comeback door ajar for Meralco.

The Bolts, though, also went cold from the field and scored just a point in the dying minutes, with Almond Vosotros sealing the win for the Tropang Giga off a free throw.

It was a landmark win for TNT, which is mentored by Mau Belen, the first female coach in PBA history.

Platinum got off to a 3-0 start in the leg only to lose three of its last four games, including a 14-18 semifinals defeat to the Bolts.

The San Miguel Beermen, Terrafirma 3×3, Cavitex Braves, and Barangay Ginebra reached the knockout stage but crashed out of the quarterfinals.