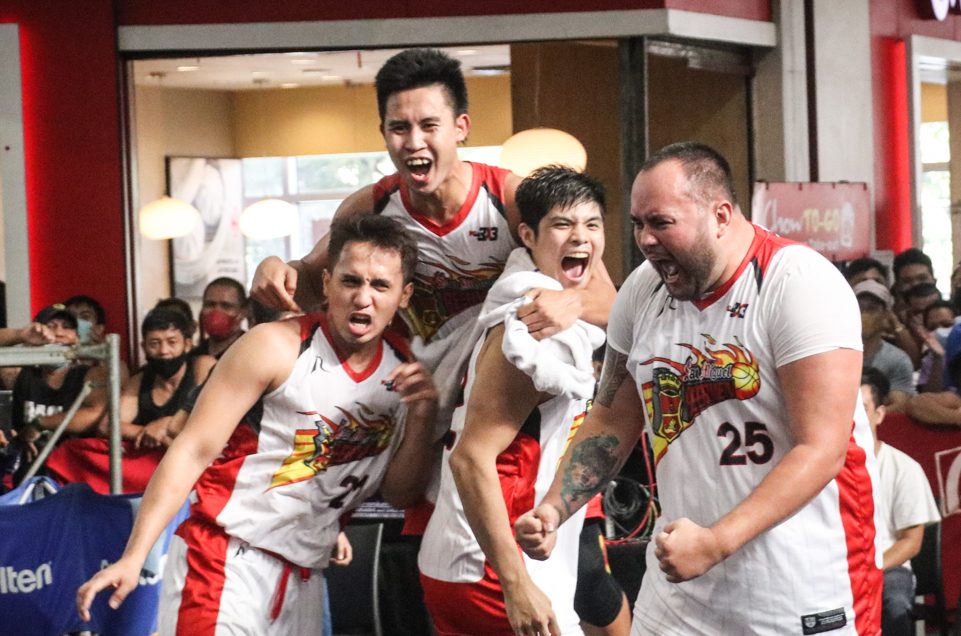 COMEBACK. San Miguel refuses to give up as it turns back TNT for the Leg 4 crown.

Facebook Twitter Copy URL
Copied
With TNT on the brink of the title, Ken Bono and San Miguel storm back from 7 points down to secure its first championship in the second PBA 3x3 season

MANILA, Philippines – San Miguel broke through in the second PBA 3×3 season as it ruled Leg 4 of the First Conference following a sensational 22-20 finals win over TNT at the Robinsons Place Malabon on Sunday, October 9.

Ken Bono showed the way with 8 points, 5 rebounds and 2 blocks in the victory that saw the Beermen storm back from 7 points down to deny the Tropang Giga their second leg crown this conference.

An Almond Vosotros two-pointers put TNT on the brink of the championship, 20-13, but San Miguel held its nerve and uncorked the title-clinching 9-0 run behind Bono.

Bono then delivered the finishing blow after Comboy made it 21-20 as he sank the game-winning short stab to complete their stunning comeback over Leg 1 champions Tropang Giga.

Comboy finished with 6 points and 6 rebounds in the win that secured San Miguel the top prize of P100,000, while Manday put up 5 points, 5 rebounds, and 5 assists.

Vosotros churned out 8 points, 5 rebounds, and 4 assists, but his numbers went for naught as TNT wasted several chances after going scoreless in the final three minutes.

Meanwhile, Leg 3 titlist Meralco settled for P30,000 after a 19-12 win over Platinum Karaoke in the battle for third after a solid performance from Reymar Caduyac.