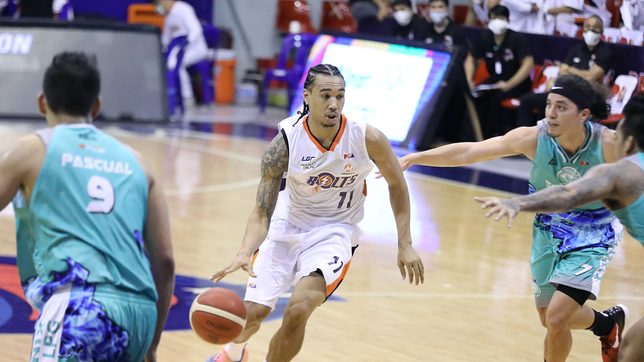 ACROSS THE BOARD. Chris Newsome powers Meralco against Phoenix with an all-around game.

The Alaska Aces halted their two-game losing streak with a convincing 74-48 victory over the Rain or Shine Elasto Painters in the PBA Philippine Cup at the Ynares Sports Arena in Pasig on Wednesday, July 28.

Rodney Brondial topscored for the Aces with 13 points on 5-of-7 shooting, while Abu Tratter added 12 points and 13 rebounds as they climbed up to 2-2 in the standings.

“I think what allowed us to be successful tonight was really how we approached losing the last game,” said Alaska Aces coach Jeff Cariaso.

“Mentally, it’s a challenge when you lose two in a row. With the quick schedule like we have, you can’t be too high or you can’t be too low and I want to commend the guys for not being too low even after losing two games,” he added.

After falling to the Phoenix Super LPG Fuel Masters in their previous outing, the Aces came out firing from the get-go and built an 18-point lead, 41-23, at the half.

The Aces then went on a scorching 7-0 run early in the third period to extend the lead to 25, 48-23, which proved too much for the ice-cold Elasto Painters to overcome.

Adrian Wong had 9 points, while Norbert Torres chipped in 7 markers for the Elasto Painters, who suffered their first loss in the conference after a blazing 3-0 start.

In the second game, the Meralco Bolts also got back on winning track after taking down the Fuel Masters, 91-80.

Allein Maliksi put up 24 points and 7 rebounds, while Chris Newsome finished with an all-around game of 23 points, 7 assists, and 4 rebounds for the Bolts, who moved up to 3-1 in the standings.

“Our defense was pretty solid again tonight, which is really the key for us,” said Meralco Bolts coach Norman Black.

“It’s a big win for us, but of course we have Alaska coming up on Saturday. They’re coming off a big win today so it should be a tough contest.”

After leading by only 5 points at the end of the opening period, 21-16, the Bolts caught fire in the second frame and outscored the Fuel Masters, 27-16, for a comfortable 48-32 lead at halftime.

It was all Meralco from there on as it managed to extend its lead to as many as 21 points, 84-63, halfway through the final frame to put Phoenix away for good.

Matthew Wright had a game-high 29 points to go with 4 rebounds and 3 assists, while Vic Manuel and RJ Jazul contributed 13 and 12 points, respectively, for the Fuel Masters, who dropped to 1-3 in the standings.