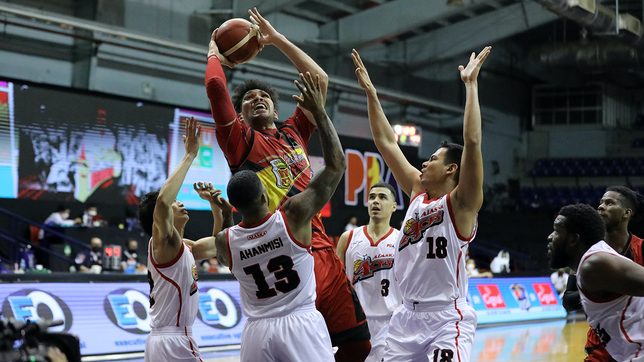 MANILA, Philippines – San Miguel has yet to yield its expected results from its roster shakeup as it absorbed a 99-94 loss at the hands of Alaska in the PBA Governors’ Cup at the Ynares Sports Arena in Pasig on Friday, December 10.

Import Olu Ashaolu delivered 23 points, 13 rebounds, and 4 assists in a do-it-all effort to lead the Aces to their first 2-0 start under head coach Jeff Cariaso.

The Beermen threatened a comeback behind import Brandon Brown, who shaved their deficit to 94-97 with a three-pointer, but Alaska held on thanks to some clutch free throws from Mike Tolomia.

Acquired from Blackwater during the offseason, Tolomia proved his worth down the stretch as he knocked down four pressure-packed free throws, including the last two foul shots that determined the final score, to finish with 6 points and 3 assists.

Robbie Herndon scored in twin digits anew for the Aces with 11 points to go with 6 assists and 2 steals, while Abu Tratter, Alec Stockton, and Mike DiGregorio chalked up 10 points apiece.

Maverick Ahanmisi also shone in the win with 9 points, 8 rebounds, 6 assists, and 2 steals.

San Miguel still led 65-63 midway through the third quarter before Ashaolu linked up with Tratter and Ahanmisi for a 14-3 run that gave Alaska a 77-68 advantage going into the final salvo.

June Mar Fajardo netted 23 points and 15 rebounds for the Beermen, who lost their first two games for the first time since 2019.

San Miguel retooled its roster by trading veterans Arwind Santos and Alex Cabagnot with the hopes of finally breaking through after three straight conferences of missing the finals, but the team has since struggled without its old reliables.

Brown put up 22 points, 14 rebounds, 5 assists, and 3 steals in the loss, while Terrence Romeo contributed 16 points and 6 assists.