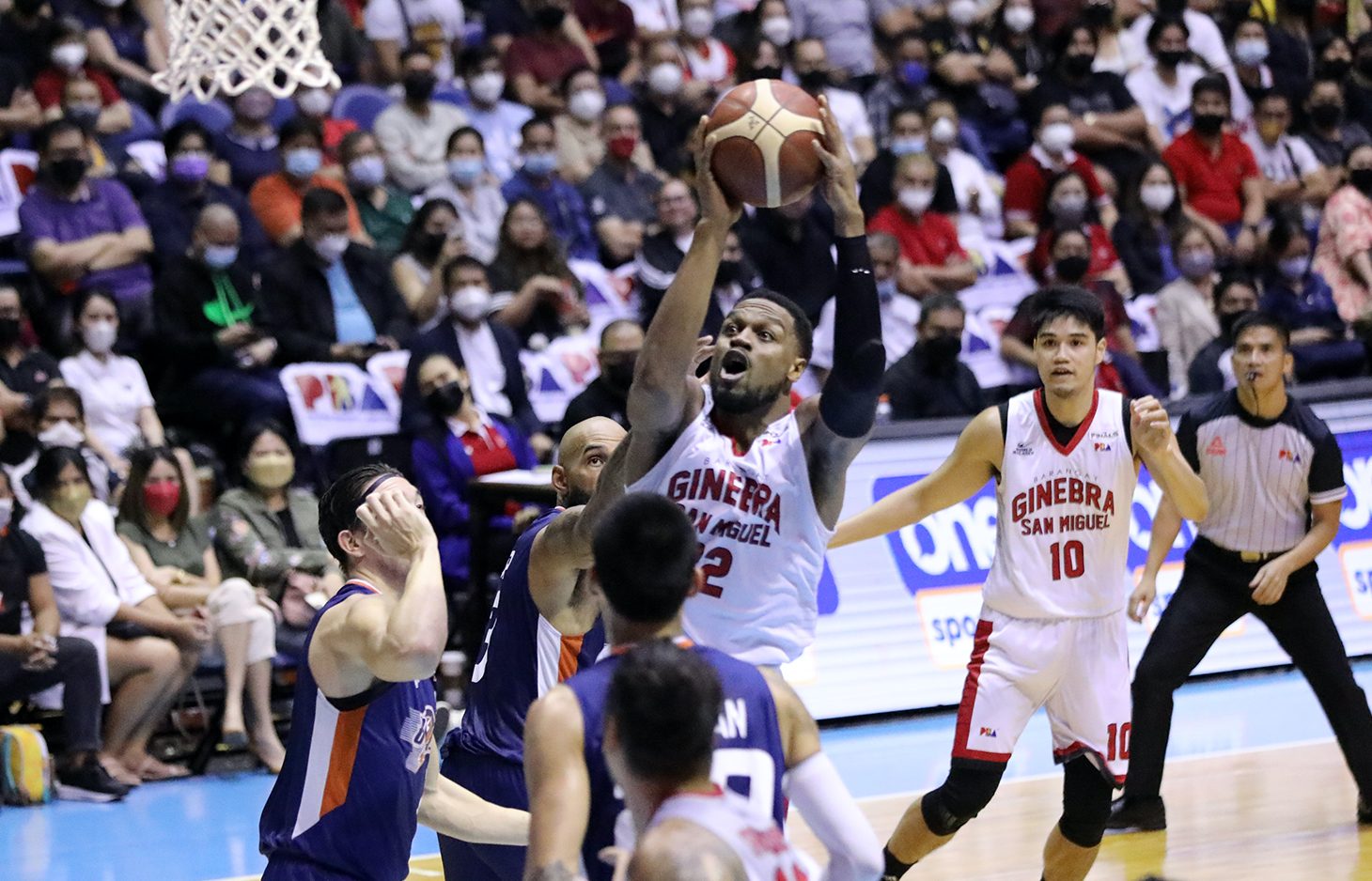 STEPPING UP. Justin Brownlee rebounds from a quiet Game 3 outing as Barangay Ginebra avoids a 1-3 hole.

MANILA, Philippines – Justin Brownlee and Scottie Thompson had no plans losing on their special night.

Brownlee and Thompson conspired to key Barangay Ginebra to a 95-84 win over Meralco that leveled the PBA Governors’ Cup finals at 2-2 at the Araneta Coliseum on Wednesday, April 13.

On a night Brownlee and Thompson won Best Import and Best Player of the Conference, the two rose to the occasion as the Gin Kings prevented the Bolts from taking a 3-1 lead for the first time in their four title showdowns.

Brownlee chalked up all-around numbers of 27 points, 18 rebounds, 7 assists, 3 steals, and 2 blocks to bounce back from a quiet performance in their Game 3 loss where he got limited to a conference-low 19 points.

Meanwhile, Thompson also netted 27 points along with 4 rebounds and 4 assists, knocking down a clutch three-pointer late that helped weather a fourth-quarter storm from Meralco.

Buried by as deep as 20 points, the Bolts got within 7 points with 2:40 minutes left off a Chris Newsome triple, 78-85, only to witness Thompson restore their lead back to double digits with his own trey in the next play.

Newsome and Maliksi sank three-pointers in the final two minutes, but Ginebra held on thanks to some timely buckets from LA Tenorio, who scored 10 of his 17 points in the final quarter.

Tenorio drilled in a triple with 1:17 minutes left as the Gin Kings took a 93-81 lead, much to the delight of the proud Ginebra faithful who comprised of the new pandemic record 17,298 fans who watched live.

“That is when we’re at our best: when everybody is contributing, everybody is working on the offense and the defensive side,” said Gin Kings head coach Tim Cone.

“I thought we played our best game of the series today.”

It was still a fairly tight contest midway through the third period with Meralco trailing 46-51 before Brownlee and Thompson linked up to ignite a 17-8 blast which opened the floodgates for Ginebra.

Brownlee and Thompson combined for 15 points during that stretch and connected on a buzzer beater that capped the run and gave Ginebra a 68-54 lead going into the last frame.

That play, which saw Thompson locate Brownlee for an easy layup, encapsulated how Game 4 went for the two teams: with the Gin Kings pushing the pace and the Bolts being a step slow on defense.

Christian Standhardinger, Jeff Chan, and John Pinto connived for 24 points and anchored a 12-6 run to start the fourth quarter as Ginebra savored its biggest lead of the game at 80-60.

Almost everything went right for the Gin Kings in Game 4, including the return of Japeth Aguilar after he missed the last six games due a calf injury.

Despite going scoreless and tallying just a single rebound in 10 minutes of action for Ginebra, Aguilar made a difference with his inside presence as he wound up with a plus-minus of +10.

The Bolts and the Gin Kings will have a three-day break before they dispute the 3-2 series lead in Game 5 on Sunday, April 17, at the same venue.