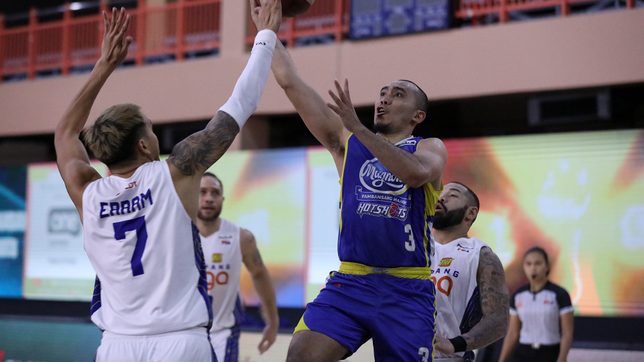 RESURGENCE. Paul Lee finally finds his groove after struggling in the first two games of the finals.

Magnolia overcame another shooting clinic from TNT star Mikey Williams to avoid a precarious 0-3 hole in the PBA Philippine Cup finals with a 106-98 win at the DHVSU Gym in Bacolor, Pampanga on Sunday, October 24.

Williams sizzled for an all-time PBA finals record 10 triples and exploded for 39 points, but the Hotshots put those impressive numbers to waste as they trimmed their deficit in the best-of-seven affair to 1-2.

Lee dropped 10 points in the third quarter to give the Hotshots an 82-77 lead before Mark Barroca took over in the final period as they held off a late comeback attempt from the Tropang Giga.

Although ailing a hamstring injury, Barroca scored 7 of his 16 points in a 13-0 run to start the fourth quarter and knocked down a clutch bucket with 50 ticks left that kept TNT at bay.

Free throws by Ian Sangalang and Rome dela Rosa in the final 20 seconds sealed the win for Magnolia.

Dela Rosa chimed in 9 points in the victory.

The loss was a double black eye for the Tropang Giga as Troy Rosario went down with a dislocated pinky finger caused by a nasty fall following a flagrant foul from Jackson Corpuz in the third quarter.

Rosario did not return after also hurting his back, while Corpuz got ejected after picking up a technical foul earlier in the game.

Poy Erram delivered a double-double of 10 points and 11 rebounds in the losing effort.