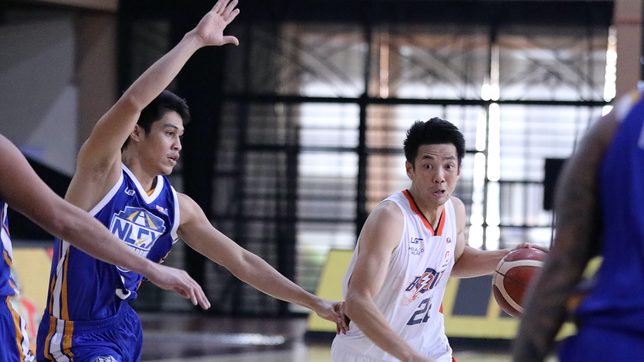 Facebook Twitter Copy URL
Copied
NLEX rookie Calvin Oftana plays the best game of his young PBA career, but Meralco holds on to clinch the twice-to-beat incentive in the quarterfinals

Meralco locked up the last twice-to-beat playoff bonus in the PBA Philippine Cup after hacking out a 104-101 win over NLEX at the DHVSU Gym in Bacolor, Pampanga on Wednesday, September 22.

Allein Maliksi churned out 22 points on an efficient 8-of-14 shooting to lead six players in twin digits as the Bolts raised their record to 8-2 and clinched the second seed in the quarterfinals with one game left in the eliminations.

Even if Meralco loses to Barangay Ginebra on Thursday and figure in a tie at 8-3 with Magnolia, it still holds the edge for the playoff incentive by virtue of winning their elimination-round game.

Mac Belo was just as stellar as Maliksi after firing 16 points on top of 7 rebounds and 5 assists, while rookie Alvin Pasaol notched a career-high 17 points in the nail-biting win.

The trio of Maliksi, Belo, and Pasaol waxed hot early and all scored in double figures in the first half – combining for 34 points – as the Bolts built a 65-54 advantage at halftime.

Meralco stretched its lead to as many as 20 points, 85-65, an enough cushion to withstand a late Road Warriors surge led by rookie Calvin Oftana, who torched the Bolts with a career-high 34 points on an 8-of-11 clip from deep.

Oftana drained three straight triples in the final two minutes to shave their deficit to a single possession, 101-103, with only 2.4 ticks left.

But Meralco held on to the win, with Raymond Almazan splitting his free throws in the ensuing possession as time ran out on NLEX.

Almazan delivered 13 points, 11 rebounds, and 3 blocks in the victory, while Bong Quinto had 10 points, 8 assists, 7 rebounds, and 2 steals, while Anjo Caram added 10 points and 4 assists.

Back in the lineup from health and safety protocols, Bolts star Chris Newsome played only eight minutes after getting ejected for throwing the ball at Anthony Semerad during their brief fracas in the fourth quarter.

Semerad got slapped with a technical foul from the altercation.

Raul Soyud put up 14 points and 12 rebounds in the loss, while JR Quiñahan chimed in 13 points and 5 rebounds as the Road Warriors ended the elimination round with a 5-6 record.