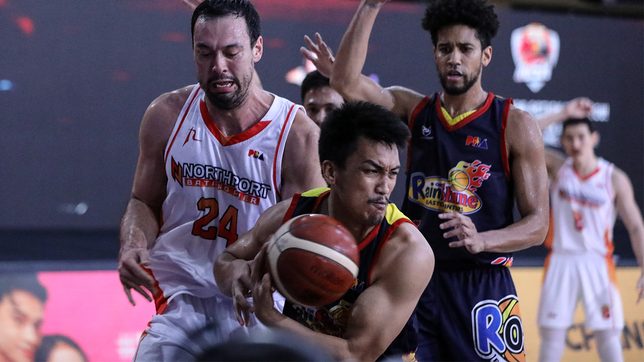 Greg Slaughter came up big for the NorthPort Batang Pier as they escaped the Rain or Shine Elasto Painters in overtime, 91-88, in the PBA Philippine Cup at the DHVSU Gym in Bacolor, Pampanga on Sunday, September 19.

Slaughter delivered the game-saving block for the Batang Pier in overtime and finished with a monster stat line of 25 points, 11 rebounds, and 6 blocks as they improved their chances of making it to the playoffs with a 5-5 record.

“We’re just a team that wants to win,” said Slaughter.

“We trust in each other, we trust in coach Pido (Jarencio), we just pulled it together, and then we have to move on to the next one,” he added.

After suffering a bitter 1-point loss to Magnolia just two days ago, NorthPort started the game on the right foot and led by as many as 13 points, 27-14, late in the first quarter.

Rain or Shine managed to catch up and momentarily held the lead in the second period, but NorthPort regained its footing for a 5-point lead at halftime, 42-37.

It was a nip-and-tuck battle between both squads throughout the entire second half, and with the score knotted at 80-all with only 4.3 seconds remaining in regulation, high-scoring guard Robert Bolick missed on a potential game-winning floater for NorthPort at the buzzer.

In overtime, with NorthPort leading by only 3 points with three seconds left, 91-88, Batang Pier rookie Jamie Malonzo committed a costly foul on Elasto Painters guard James Yap while shooting from the three-point land.

Luckily for Malonzo and the Batang Pier, Yap missed all his free throws that could’ve sent the game to second overtime.

Still up by 3 with two seconds remaining after Malonzo also missed both his free throws, it was Slaughter who saved the day for NorthPort as he swatted away Gabe Norwood’s three-point attempt for Rain or Shine at the buzzer.

Bolick added 24 points, 7 assists, and 6 rebounds for the Batang Pier, while Sean Anthony chipped in 9 points and 10 rebounds in the victory.

Jewel Ponferada topscored for the Elasto Painters with 17 points, while Beau Belga had 11 markers as Rain or Shine, which is already assured of a playoff spot, moved down to 6-5 in the standings.