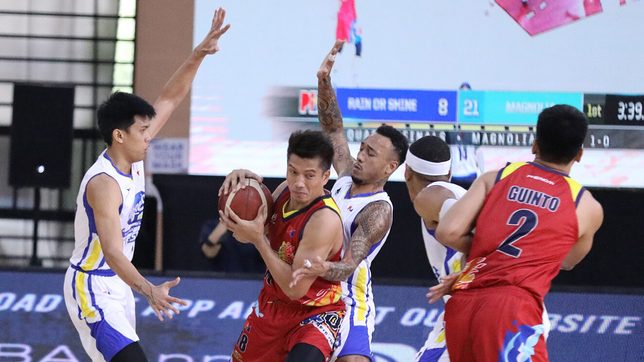 The Magnolia Hotshots once again stayed composed in the endgame as they swept the Rain or Shine Elasto Painters, 96-86, in the 2021 PBA Philippine Cup quarterfinals at the DHVSU Gym in Bacolor, Pampanga on Thursday, September 30.

With the win, the third-seeded squad officially clinched a best-of-seven semifinals series against either the second-ranked Meralco Bolts or seventh-placer NLEX Road Warriors.

Leading Best Player of the Conference candidate Calvin Abueva proved anew why he deserves that top spot after tallying a monster double-double of 20 points and 19 rebounds off the bench on 6-of-11 shooting and 7-of-8 free throws.

Paul Lee, meanwhile, continued his stellar shooting streak with a game-high 24 points, while Jio Jalalon powered the bench alongside Abueva with 16 markers and 6 assists.

After a vintage “Big Game” James Yap shooting night helped cut the ROS deficit to two, 69-71, entering the fourth quarter, the Hotshots blazed ahead with a 13-2 opening salvo for the 84-71 gap at the 7:33 mark off an Abueva layup.

Although a pair of late Rey Nambatac triples again put the Painters within striking distance down six, 86-92, their comeback hopes were dashed after Mark Barroca calmly responded with two clutch floaters in the final minute to put the game away for good.

“I told my players it’s a defensive battle from start to finish,” said head coach Chito Victolero after showering Rain or Shine with praises on a tough series.

“We need to execute on both ends of the floor. That’s it, we really just needed to grind and grind for 48 minutes. I thank my players for committing to what we wanted to do.”

Yap ended a quietly productive comeback conference with 16 points in 27 minutes off the bench, both season-highs, while Nambatac chipped in 13 markers, 11 in the second half alone, on a 4-of-9 clip from deep in the tough loss.