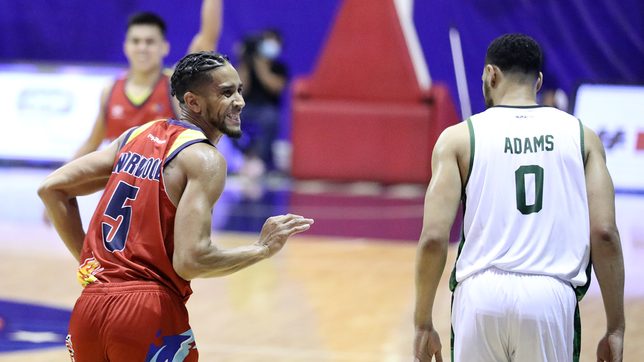 Facebook Twitter Copy URL
Copied
Missing all of his three-point attempts in their first five games, Gabe Norwood finds his mark from beyond the arc as Rain or Shine keeps Terrafirma winless

Gabe Norwood rediscovered his offensive groove and steered Rain or Shine to a come-from-behind 83-77 win over hapless Terrafirma in the PBA Philippine Cup at the Ynares Sports Arena in Pasig on Sunday, August 1.

Averaging just 5 points prior, Norwood dropped 15 points on a 3-of-5 clip from three-point land to go with 7 rebounds, 3 assists, and 2 steals as the Elasto Painters snapped a two-game skid to improve to 4-2.

The Dyip seemed to be on their way to their first win following a woeful 0-3 start after taking a 67-61 lead early in the fourth quarter.

But Rain or Shine erected a tide-changing 18-0 run powered by 8 Norwood points to seize a 12-point cushion en route to the victory.

During that stretch, Norwood – who missed all of his nine three-point attempts in their first five games – knocked down two triples and sank a pair of free throws.

Rey Nambatac topscored for the Elasto Painters with 17 points, while sophomore guard Adrian Wong chimed in another 15 points.

Mark Borboran added 9 points, 8 rebounds, and 3 assists in the win.

Juami Tiongson sizzled hot with 20 points for Terrafirma, but Rain or Shine put the clamps on him when it mattered most as he scored just 4 markers in the final period.

Without top pick Joshua Munzon due to a finger injury, the Dyip dropped to 0-4, joining the Blackwater Bossing at the bottom.