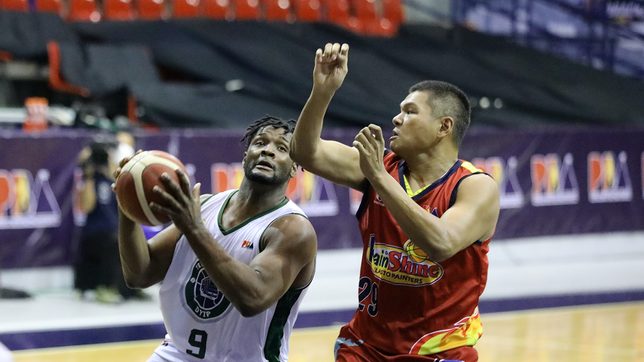 MANILA, Philippines – Alex Cabagnot dished out key dimes down the stretch and Aldrech Ramos hit several clutch shots to steer Terrafirma to a thrilling 112-106 overtime win over Rain or Shine in the PBA Governors’ Cup at the Ynares Sports Arena in Pasig on Saturday, December 11.

Ramos sent the game into an extra period with a booming triple and scored 5 of his 12 points in overtime as the Dyip claimed their first win after dropping their conference opener.

The Elasto Painters led 104-103 with 2:25 minutes left in overtime before Ramos hit a three-pointer and a layup – both assisted by Cabagnot – to give Terrafirma a 108-104 advantage with a minute remaining.

Import Antonio Hester then put Rain or Shine at bay for good with a short stab off another Cabagnot dish for a six-point Dyip lead as he finished with a game-high 40 points on top of 11 rebounds, 3 assists, and 2 steals.

Cabagnot backstopped Hester with a near triple-double of 15 points, 11 assists, and 8 rebounds, while Juami Tiongson also shone with 16 points, 6 rebounds, and 4 assists.

Terrafirma also drew prolific performances from Kyle Pascual, who came off the bench and scored 10 points in 14 minutes, and Andreas Cahilig, who contributed 9 points, including a three-pointer that put the Dyip on top, 101-100, early in overtime.

Botched free throws haunted the Elasto Painters late in regulation and in overtime as Beau Belga failed to give Rain or Shine a two-possession lead after splitting his freebies with 16 ticks left in the fourth quarter, 98-95, allowing Ramos to tie the game.

Rey Nambatac then muffed three of his last four foul shots in overtime – missed chances that would have given the Elasto Painters enough cushion to survive the Dyip.

Prior to his bungled free throws, Nambatac shot a perfect 15-of-15 clip at the stripe as he finished with a team-high-tying 25 points.

Import Henry Walker delivered 25 points, 12 rebounds, 5 assists, and 2 steals for Rain or Shine, which dropped to a tie with Terrafirma at 1-1.