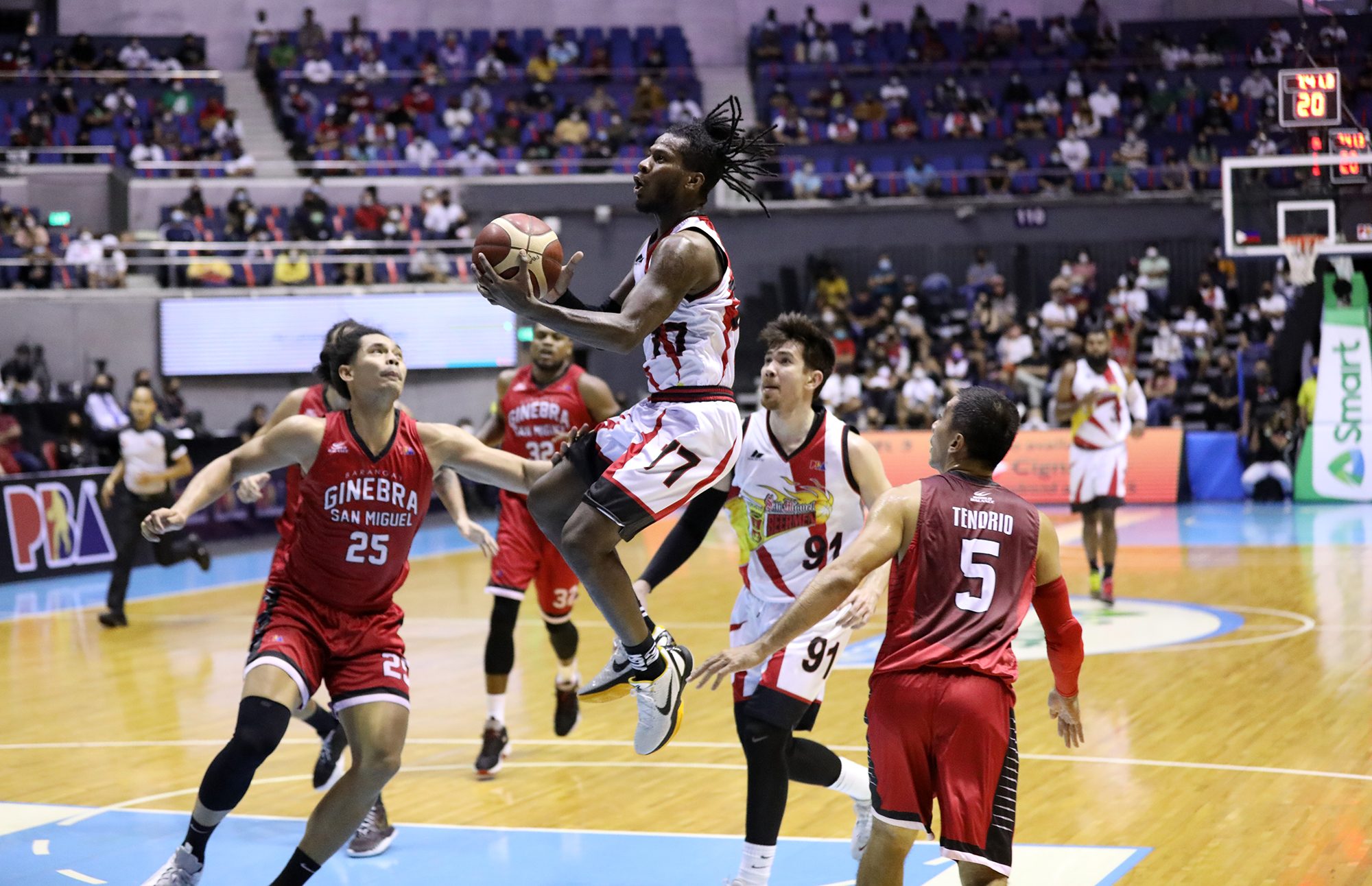 TWO-WAY STAR. CJ Perez terrorizes Ginebra on offense and defense towards a 110-102 win for San Miguel.

MANILA, Philippines – The San Miguel Beermen continued to find their groove in the 2022 PBA Governors’ Cup as they outgunned the reeling conference champion Barangay Ginebra, 110-102, at the Araneta Coliseum on Sunday, February 20.

With the win, the stacked Beermen now have a winning record at 4-3 as they sent the Gin Kings down to 3-4 and a rare four-game slide, the franchise’s longest skid in six seasons totaling 15 conferences, per league statistician Fidel Mangonon III.

Former NBA player Orlando Johnson made up for his frigid San Miguel debut, and finished with a near-triple-double of 31 points, 10 rebounds, and 8 assists on 12-of-19 shooting, a major improvement from the 3-of-22 clip he had last game.

CJ Perez, meanwhile, rose up as a pest on defense, and added 23 markers, 5 steals, 2 boards, and 2 dimes as he powered San Miguel’s massive 38-point third quarter.

From being up by just one, 58-57, early in that frame, the Beermen outscored Ginebra, 28-16, thanks to multiple defensive stops leading to uncontested fast-break finishes.

Fittingly after two key swipes within the final 4:06 of the pivotal third period, Perez capped San Miguel’s charge with a booming triple for their biggest lead of the game, 86-73, at the 1:29 mark.

Although Ginebra cut the deficit to just six late in the final frame, 100-106, Perez again came through with a clutch steal off an errant LA Tenorio pass, which got the wide-open Johnson a game-sealing dunk for the 108-100 advantage with 1:19 left.

“We know that this is a very important game for us. Everybody wants to win because we’re in the middle of the pack. This is a welcome development for us,” said head coach Leo Austria after the game.

Fan favorite Justin Brownlee labored for a game-high 40-point carry job in 46 minutes, but it was just not enough in the end.

San Miguel can start a new winning streak with a victory against the Phoenix Super LPG Fuel Masters on Wednesday, February 23, 6 pm, at the Ynares Center in Antipolo City.

Meanwhile, Ginebra can put an end to its uncharacteristic slide down the standings with a win over the free-falling Blackwater Bossing on Friday, February 25, 6 pm, also at Ynares.