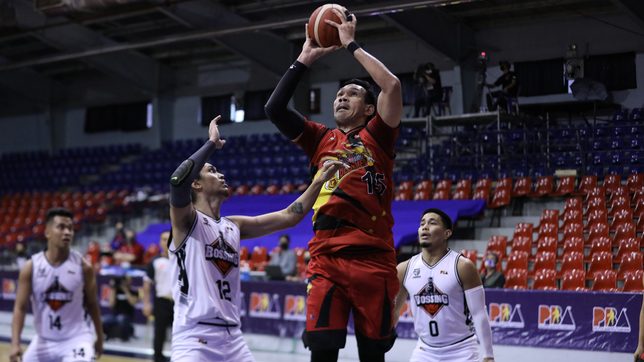 The San Miguel Beermen extended their winning streak to three games after blowing out the Blackwater Bossing, 99-80, in the PBA Philippine Cup at the Ynares Sports Arena in Pasig on Wednesday, July 28.

Seven players scored in double figures for the Beermen, but it was June Mar Fajardo who led the way with 16 points on a very efficient 6-of-8 shooting, along with 11 rebounds as they climbed to 3-1 in the standings.

“I’m happy for him because he really wanted to get back to his old form,” said San Miguel coach Leo Austria of the six-time PBA MVP Fajardo.

“What he had shown this afternoon is enough for him to gain some confidence and then [hopefully] he will realize that he’s getting back to his old form,” he added.

After leading by only a point, 39-38, at halftime, the Beermen shifted into high gear in the third period and outscored the Bossing, 30-15, for a comfortable 69-53 advantage heading into the fourth quarter.

The Beermen never looked back in the final frame and extended their lead to its biggest at 25 points, 82-57, off a CJ Perez layup with 7 minutes left in the game.

Perez added 14 points and 5 rebounds for the Beermen, while Marcio Lassiter and Alex Cabagnot chipped in 13 and 12 points, respectively.

Simon Enciso finished with a game-high 25 points, while Kelly Nabong and Mike Tolomia tallied 12 points apiece for the Bossing, who remained winless in four outings.