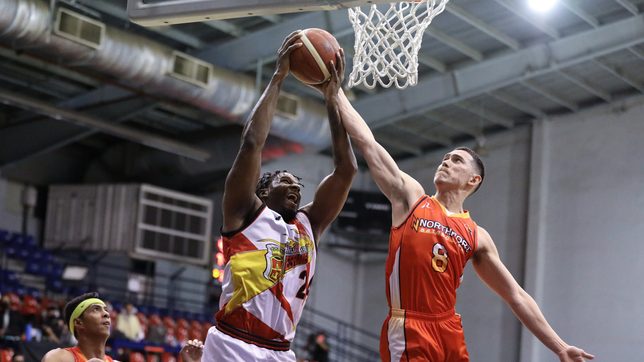 MANILA, Philippines – San Miguel squandered a massive lead but held on to beat gutsy NorthPort, 91-88, for its breakthrough win in the PBA Governors’ Cup at the Ynares Sports Arena in Pasig on Sunday, December 12.

Comfortably ahead by 27 points, the Beermen built a lead enough to withstand a furious fourth-quarter rally from the Batang Pier to notch their first win after a 0-2 start at the expense of no less than their former star forward Arwind Santos.

Santos conspired with Robert Bolick and Jamie Malonzo in the final salvo, combining for 26 of their 30 fourth-quarter points as NorthPort put San Miguel on its heels in the dying seconds.

After Bolick cut their deficit to 88-91 with 30 seconds left, the Beermen left the comeback door ajar for the Batang Pier, with CJ Perez missing a layup that would have given their side a two-possession lead.

However, Bolick and Malonzo muffed their respective game-tying three-pointers as San Miguel escaped with the win.

Import Brandon Brown led the way for the Beermen with 24 points, 12 rebounds, 7 assists, and 2 steals, while June Mar Fajardo chalked up 15 points, 7 rebounds, and 2 blocks.

Perez also delivered 15 points for San Miguel, including the short stab that pushed their lead to its biggest at 64-37 in the third quarter.

NorthPort outscored the Beermen 51-27 the rest of the way, but its second-half rally was not enough as the Batang Pier slumped to their third straight loss to start the conference.

Bolick finished with 24 points, 14 coming in the fourth quarter alone, to go with 8 assists and 5 rebounds in another failed comeback for NorthPort.

The Batang Pier also fought back from double-digit deficits against Alaska and NLEX only to fall short in the endgame, losing by a slim margin of 3.5 points.

Santos showed he still has plenty of gas left in the tank in his first game against San Miguel since he was traded to NorthPort after putting up 23 points, 11 rebounds, and 2 steals.

While Brown starred for the Beermen, the Batang Pier missed the services of injured import Cameron Forte, who averaged 17.5 points, 19 rebounds, 3 assists, and 1 block in their first two games.