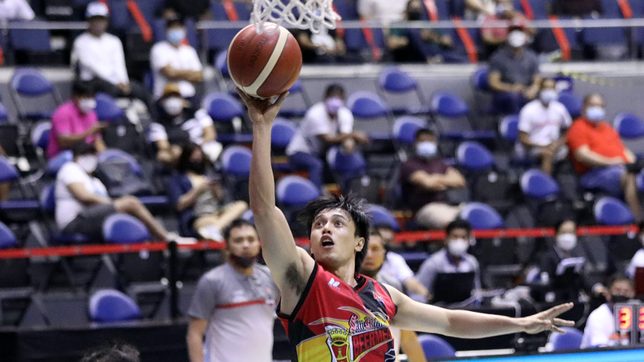 MANILA, Philippines – San Miguel ended the year with a third straight win, but not without a major scare after fending off Terrafirma, 100-88, in the PBA Governors’ Cup at the Araneta Coliseum on Sunday, December 26.

Terrence Romeo finished with 23 points and hit key buckets down the stretch as the Beermen nearly squandered a massive lead before regaining their bearings in the final two minutes to hike their record to 3-2.

Buried by as many as 23 points, the Dyip narrowed the gap to 6 points, 88-94, off four straight triples from import Antonio Hester, Juami Tiongson, and Aldrech Ramos.

San Miguel, though, held on thanks to Romeo, who also delivered 4 rebounds, 3 assists, and 2 steals.

Romeo hit a stepback jumper with 1:44 minutes left to push their lead to 96-88, and followed up a CJ Perez layup with a fadeaway jump shot to settle the final score.

Import Brandon Brown also posted 23 points to go with 10 assists, 5 rebounds, and 4 steals as the Beermen continue to pick up steam after kicking off the conference with back-to-back losses.

The closer in the victory, it was also Romeo who led the way for San Miguel to nail a 48-37 halftime lead after dropping 16 points in the first two quarters.

Perez chalked up 17 points, 8 rebounds, and 5 assists, Vic Manuel had 14 points and 8 rebounds off the bench, while June Mar Fajardo added 11 points, 7 rebounds, and 3 blocks in the win.

Tiongson netted 21 points, 5 rebounds, and 3 assists to pace Terrafirma, which slumped to its third straight loss and fourth overall for a 1-4 record.

Hester contributed 19 points, 7 rebounds, and 5 assists in the loss.