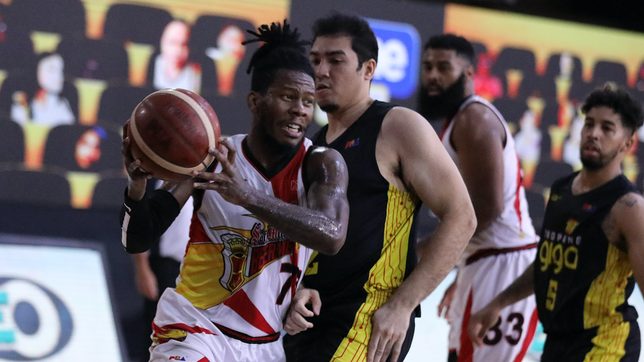 The trend of blowouts continued after San Miguel forced a do-or-die Game 7 in its PBA Philippine Cup semifinals clash against TNT with a 103-90 rout at the DHVSU Gym in Bacolor, Pampanga on Friday, October 15.

Mo Tautuaa came off the bench and delivered a game-high 24 points as the Beermen knotted the best-of-seven affair at 3-3 following the fourth straight double-digit victory of the series.

The last four games have been decided by an average of 19 points, with the two teams alternating wins.

Marcio Lassiter also starred for San Miguel after catching fire for 14 of his 19 points in the first half as his side grabbed a 53-38 halftime lead en route to the 13-point triumph.

Limited to just 5 points on a 1-of-5 clip from long ranged in their 20-point Game 5 loss, Lassiter – who also had 5 rebounds and 4 steals – drained 5 three-pointers, 4 coming in the first half.

The Beermen saw their lead swell to as big as 26 points off a CJ Perez alley-oop dunk late in the third quarter, 84-58, as the Tropang Giga never got their deficit down to single digits.

Arwind Santos also churned out a double-double in the win with 13 points and 10 rebounds as he helped the Beermen open the floodgates with back-to-back triples in the third quarter.

TNT narrowed the gap to 10 points with three minutes left, 88-98, thanks to a Roger Pogoy and-one only to witness Lassiter put the game beyond reach with a booming triple in the ensuing play.

Ryan Reyes led the way for the Tropang Giga with 16 points, 9 rebounds, and 4 assists, while Jayson Castro also had 16 points.

Game 7 is slated on Sunday, October 17, at the same venue.