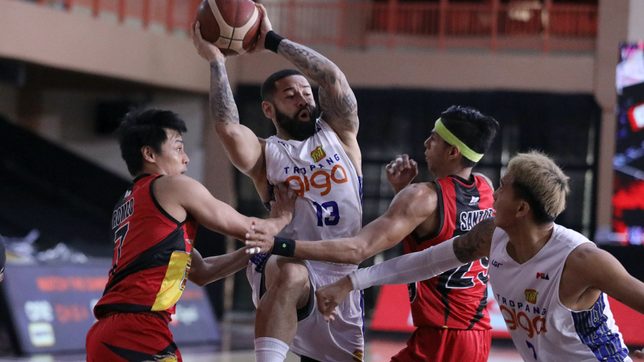 BACK AT IT. TNT will get another shot at capturing the elusive PBA Philippine Cup crown.

Roger Pogoy and Mikey Williams took turns in frustrating San Miguel to propel TNT back to the PBA Philippine Cup finals after a 97-79 Game 7 rout at the DHVSU Gym in Bacolor, Pampanga on Sunday, October 17.

Shut down in Game 6, Pogoy caught fire with series-high 27 points as the Tropang Giga reached the all-Filipino finals for the second straight year after a nip-and-tuck semifinals that saw no team win back-to-back games.

Pogoy had only 4 points in the first half until he hit his stride in the third quarter, dropping 10 points in the period to help TNT seize a 67-55 lead going into the final salvo.

The Beermen never got their deficit down to single digits and the Tropang Giga pulled away for good, with Pogoy and Poy Erram linking up for a three-point party as they led by as many as 26 points.

Pogoy and Erram drained two three-pointers each in a decisive 20-4 run in the fourth quarter that gave TNT a 97-71 lead.

Mikey Williams backstopped Pogoy with 20 points, 8 rebounds, and 6 assists, while Erram put up 9 points, 11 rebounds, and 3 blocks off the bench.

Troy Rosario had a double-double of 12 points and 12 rebounds for the Tropang Giga, who also sapped strength from Kelly Williams following his 11-point, 10-rebound, and 2-block outing.

Falling short of the grand prize last season, TNT will try to get the job done this time as it faces Magnolia in a best-of-seven championship duel.

San Miguel was primed for a sixth trip to the Philippine Cup finals over the last seven years after ending the opening quarter with 23-15 advantage built on 5 three-pointers.

But everything went downhill for the Beermen since as they got outscored by the Tropang Giga 30-13 in the second quarter.

To add to its offensive woes, San Miguel also lost key players Mo Tautuaa and Terrence Romeo to injuries as they both subbed out in the third quarter and never returned.

June Mar Fajardo did most of the heavy lifting for the Beermen, churning out 22 points, 16 rebounds, 3 assists, and 2 blocks, but lacked offensive help from his teammates.

One of the heroes in their series-tying Game 6 win, Marcio Lassiter wound up scoreless in the do-or-die match after missing all of his eight field goals.