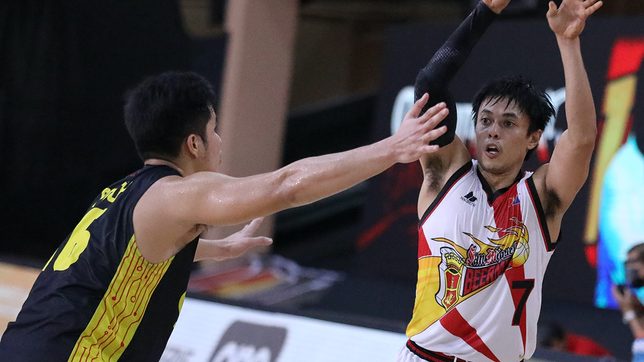 Terrence Romeo caught fire late, while Marcio Lassiter sank the game-winner to propel San Miguel to a thrilling 98-96 victory over TNT in Game 2 of their PBA Philippine Cup semifinals on Wednesday, October 6.

Romeo churned out 15 of his 26 points in the final quarter as the Beermen, who fell short of their comeback in a sorry 88-89 loss in Game 1, clawed back from a 19-point hole to knot the best-of-seven duel at 1-1.

Lassiter then picked up where Romeo left off, scoring 4 of his 7 points in the final 30 seconds, including the last-second putback that broke the hearts of the top seed Tropang Giga.

TNT managed to force misses on June Mar Fajardo and Arwind Santos, but Lassiter was in the right place at the right time to clean up their mess, banking the ball off the board just before the final buzzer sounded.

With the clutch play, Lassiter redeemed himself after muffing the potential game-winning layup in the series opener.

It looked like all hope was lost for San Miguel as it trailed by 15 points at the start of the last period until Romeo waxed hot, capping his explosion with 7 points in a 10-3 run that cut their deficit to 92-93 with 1:30 minutes left.

Lassiter and Chris Ross then gave the Beermen a 96-93 lead by draining all of their four foul shots in the last 30 seconds.

The Tropang Giga tied the game off a Troy Rosario triple with 6.4 ticks left, 96-96, but Lassiter made sure they will walk away with the win this time.

“Regarding our energy, we were really drained. But my players showed how big their hearts are. We were down by 19 points but we kept on fighting,” said San Miguel head coach Leo Austria in Filipino.

Fajardo backstopped Romeo with a conference-high 22 points on top of 10 rebounds and 4 assists, while Alex Cabagnot chimed in 14 points.

Roger Pogoy once again led TNT in scoring with 21 points to go with 6 rebounds and 3 rebounds, but got limited to just 2 points in the fourth quarter as the Beermen outscored the Tropang Giga 31-14 in the period.

Poy Erram delivered 20 points and 11 rebounds in the loss.