Brownlee battles back from ankle injury, weight gain as he nears peak form 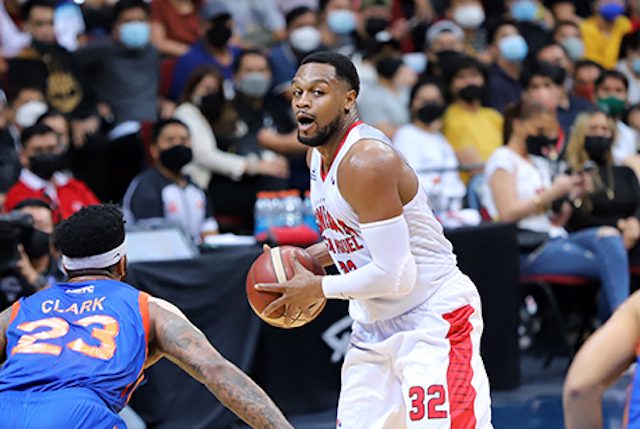 MANILA, Philippines – Not much has changed for Justin Brownlee in his eighth PBA stint for Barangay Ginebra.

At 33 years old, Brownlee continues to put up lofty numbers as he averaged 29.4 points, 11.2 rebounds, 5.6 assists, 1.2 steals, and 1.2 blocks through the quarterfinals of the Governors’ Cup.

But Brownlee playing at a high level is not an overnight thing as he needed to overcome a dislocated left ankle and weight gain during one of his Middle East stints before his Gin Kings return.

“To be honest, it was a battle just to get back to okay shape before I even got here. Just trying to work on that has been a long time.”

Rehabbing for half a year, Brownlee arrived in the Philippines last December weighing around 240 pounds, far from the top shape that made him a perennial contender for the Best Import of the Conference honors.

The American, though, has gradually worked his way back to his dangerous shape, as proven by his impressive outing of 27 points, 14 rebounds, 6 assists, and 4 blocks as Ginebra beat NLEX in Game 1 of the semifinals.

“Feeling better, feeling more like before the pandemic,” Brownlee said.

“I knew soon as I got back in the Philippines I did not feel like I was in great shape, so I’ve just been working hard trying to get back to that rhythm I’m accustomed to here.”

The Gin Kings are certainly benefitting from Brownlee finally reaching the peak in terms of physical fitness.

In their big fourth quarter against the Road Warriors, which saw Ginebra ride on a 15-0 run late in the period to clinch the win, Brownlee scattered 6 points, 5 rebounds, 3 blocks, and 2 assists.

“Right now, to me, he is starting to peak at this point – in terms of shape, in terms of game,” said Gin Kings head coach Tim Cone. “I mean he blocked shots, he got rebounds, he made shots, he made free throws.”

“He is an incredible closer and always has been for us. That is his reputation. But I think it is just he is starting to get to where he wants to be right now. He is starting to feel good.” – Rappler.com