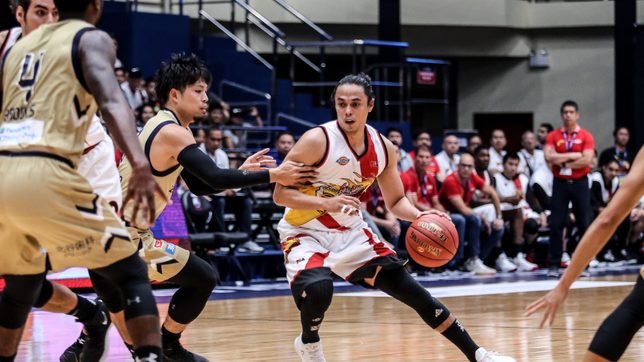 FOREIGN BATTLE. San Miguel is one of the four PBA teams that have seen action in tournaments staged by the East Asia Super League.

The PBA aims to prove that is it the “best league in Asia” after it struck a deal with the East Asia Super League (EASL) to forge stronger ties with other leagues in the region.

Going global is the goal of the PBA as it became a member of EASL, which will stage a tournament next year where the top teams from the Philippines, Japan, China, Taiwan, and Korea will see action.

“The intention why we wanted to be there [is] so that we can also have stronger ties with the four, five leagues in the region,” said PBA chairman Ricky Vargas during the Philippine Sportswriters Association online forum.

With Thirdy Ravena blazing the trail, a bunch of Filipino basketball players opted to pursue overseas careers, most notably in the Japan B. League.

The PBA even figured in a tug of war with the B. League as Kiefer Ravena signed with the Shiga Lakestars despite having a live contract with the NLEX Road Warriors.

Over in Taiwan, Gilas Pilipinas guard Jordan Heading inked a deal with the Taichung Suns of the T1 League even as he remained under contract with the Samahang Basketbol ng Pilipinas.

A total of four PBA teams have competed in tournaments organized by the EASL, namely, San Miguel, TNT, NLEX, and Blackwater.

However, no PBA squad has won an EASL title, with San Miguel and NLEX both landing at fourth place for the highest finish of a Filipino team.

“[T]he reason we also joined that is we also wanted to show that we are the best league in Asia,” said Vargas.

“It will be good for us to show that the PBA is alive and the PBA is competitive in a league such as that.”

Vargas said the PBA also plans to bring EASL games to the country.

“It’s the beginning of going global. It’s time to open up, join our brothers in Asia, work with them, play with them, and show them what the Filipino has,” Vargas said.

“What will happen is we have more opportunities for our players to able to show their wares overseas.” – Rappler.com