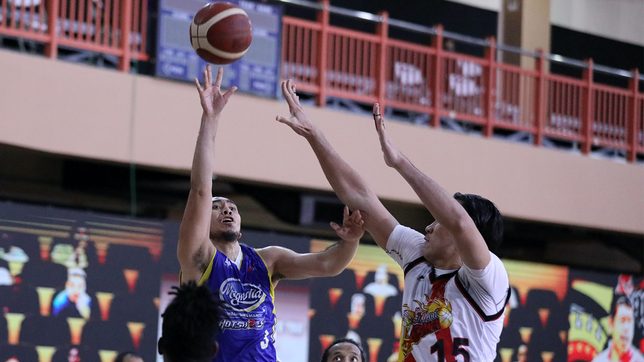 STARS. Paul Lee and (left) and June Mar Fajardo will serve as faces of the PBA in the upcoming EASL season.

Facebook Twitter Copy URL
Copied
The PBA has partnered with the East Asia Super League, which will launch its inaugural season where the top pro teams from the Philippines, Japan, Korea, and Taiwan will tangle

The PBA named a player from each of its 12 teams who will act as faces of the league in the upcoming EASL season where the top professional clubs from the Philippines, Japan, Korea, and Taiwan will vie for the $1 million grand prize.

Other players who were given the task as ambassadors include Barangay Ginebra’s Scottie Thompson, Phoenix’s Matthew Wright, TNT’s Roger Pogoy, and Rain or Shine’s Gabe Norwood.

The PBA included Ginebra’s Jared Dillinger as a special addition as the EASL promoted his videos documenting life inside the first-ever PBA bubble in Clark, Pampanga last year.

“Bragging rights are on the line going up against Asia’s best clubs,” said Dillinger.

“The extra cherry on top is representing your country. It brings out your competitive nature and the pride of proving you’re better. EASL will bring people together.”

A total of eight teams – the champions and runners-up of the PBA, Korean Basketball League, and Japan B. League, the champion of Taiwan’s P. League, and the Bay Area Chun Yu Phoenixes – will tangle in the tournament that features a home-and-away format.

The EASL season will kick off in October 2022. – Rappler.com